In fact, one of the most important reasons to stretch wrap is load securing. Stretch wrapping a load gives it a measure of security and safety from the often-chaotic journey it will take from manufacturer to final destination. However, millions of loads slide off their pallets during shipment every year. These loads fail because the very way that we move pallets (within warehouses, onto transportation, etc.) can undermine the safety and security stretch wrap adds.

The Risks Inherent in Moving a Pallet Load 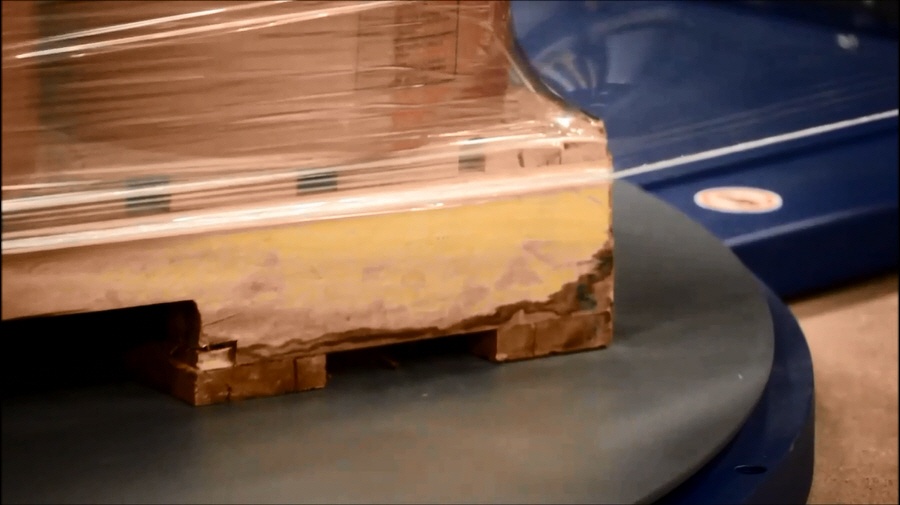 What began as a tear or puncture in the stretch film can, over time, expand into a large hole that spreads up the load. When this happens, the holding force the film exerts on the load is reduced or lost,  which can lead to load failure. And load failure can lead to damaged or unsalable product.

Three Ways to Lock a Load to a Pallet

There are three common ways most loads are secured to a pallet.

The most basic, and least effective, method is simply wrapping to the bottom of the pallet at the end of the stretch wrapping cycle. The problem with this method is that it leaves the load especially vulnerable to loss of containment force from punctures.

With stretch wrap around the base of the pallet, every time a forklift or pallet jack is inserted into the pallet base you puncture or tear the stretch wrap film and run the risk of the tear spreading.

Some stretch wrapper machines seek to minimize this risk by creating a film rope. At the end of the stretch wrapping cycle, the machine bunches the film into an accordion-like rope. This is often hard to position exactly where you want it to be on the pallet, and, during the stress of shipment, a film rope tends to un-bunch. As the rope un-bunches, it’s effectiveness decreases.

The best way to secure a load to a pallet is to create a film cable. At the end of the stretch wrapping cycle, the last 3 to 5 inches of film web are rolled into a tight cable. This cable is then driven down on to the pallet, about an inch below the deck boards.

A film cable is strong enough to lock the load to the pallet, but also high enough to clear the forks of a forklift or pallet jack as they pick up the load.

A good rule of thumb is that every load that ships on a pallet should be bonded to it without punctures or tears in the stretch film The best way to avoid punctures and tears is by using a film cable that will make it less likely a forklift or pallet jack will compromise the load.

Load securing with stretch film is a priority when palletizing. Learn about the advantages of using film cable vs. film rope to secure your loads.