How to Stop Repetitive Work When Stretch Wrapping

How to Stop Repetitive Work When Stretch Wrapping 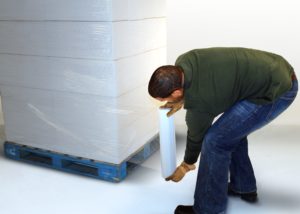 People have an increased risk for injury when they perform repetitive work for long periods of time. Hand wrapping pallet loads of product is a common way warehouse workers experience repetitive strain injuries.

While hand wrapping a person must bend over and pull film tightly to apply it to the load while walking-in circles for about two to four (very long) minutes. So it makes sense that warehouse workers are at least eight times more likely to suffer back problems than other types of workers.

Not only is hand wrapping dangerous for your employees, it’s a huge productivity and money drain.

Machines can wrap loads more consistently, safer and cheaper. If you replace hand wrapping with a modern stretch wrapper, you can easily reduce injuries, material and labor costs. Plus, you’ll improve employee morale and retention.

Most modern stretch wrappers can pre-stretch stretch film between 200 and 300 percent.

Machines can also help you eliminate a large chunk of the labor associated with hand wrapping.

Operators no longer have to spend hours a day walking in circles to apply film to a load. They can press a button to start a wrap cycle, and then go perform productive tasks while the machines wraps the load.

To learn more about how using a stretch wrapper can replace your hand wrapping operation, visit Lantech.com.

Repetitive strain injuries cost companies billions every year. Find out what you can do when stretch wrapping to avoid them.