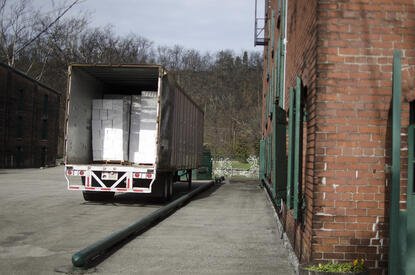 The prevailing theory has been that over a period of several months and before the pallets ever left the distillery, thieves stole from the middle of a pallet, making the missing three-bottle cases unnoticeable to the naked eye.

The two distillery employees themselves, or individuals they hired, removed the bourbon from a truck during a scheduled delivery.

“We’re pretty sure we know what happened,” Melton said in recent interview. “It’s being able to prove that is what the issue is.”

It’s unclear when and how the missing lot of bottles was discovered, but it’s possible a weight check played a role. The missing bourbon went unnoticed until one of these scenarios happened:

Melton also believes the stolen bourbon traveled outside of Kentucky, and has already been sold on the secondary market.

When the distillery weighs its loads — pallets of bourbon cases in this situation — before they’re shipped out, it’s easy to confirm whether product arrived at their destination intact without pilferage.

Keeping a record of weight may have helped prove the theft happened during shipment and not before it left the distillery.

Do you know what happened to the missing Pappy? The Franklin County Sheriff’s Department is still offering a $10,000 reward to whomever leads his department to the masterminds behind the crime.

“If it hasn’t been found now, I don’t think it’s ever going to be found,” Julian Van Winkle III, president of the Old Rip Van Winkle Distillery, which is a partnership of Buffalo Trace owner Sazerac Co. and the Van Winkle family, told USA Today.

If you would like to read our original blog article, The Case of the Missing Pappy Van Winkle Bourbon, published on January 8, 2014, please click here.

Download the ebook below to learn how weighing your loads helps identify pilferage.