The Epidemic Problem That’s Increasing Your Risk of Load Failure 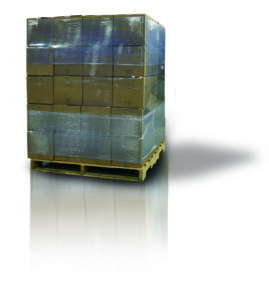 In last week’s blog, we point out that even though stretch wrapping has become the standard way to unitize a load for shipment, hardly anyone does it well, which creates a lot of bad loads.

This epidemic of badly contained loads has huge and hidden costs caused by the waste from unnecessary risk, damage and rework. In our era of economic and environmental challenges, we can’t afford to tolerate these costs.

As you know, containment force is what holds loads together during shipping and handling. It’s the product of the wrap force applied to the load by the stretch wrapper multiplied by the number of film layers applied in the wrap cycle.

The right amount of containment force should be applied everywhere on the load to the top, middle and bottom. A visual “indicator” that containment force isn’t applied properly is also simple and straightforward: the load has less film in the middle or it looks like an hourglass shape (see picture to the right.)

You need to establish a containment force standard for your loads. If you need help getting started, you can use our Containment Force Recommendation Chart to give you guidelines. You must measure your load’s containment force with a tool in order to know you have the right amount.

The bad news — we see loads that look like our example everywhere. The good news — we know how to fix them.

The obvious fix — redistributing containment force on the load — may not always be quite as easy as it seems. It’s sometimes surprisingly hard to manipulate a 20″ or 30″ wide film web or add or take off film revolutions to precisely dial in the desired level of containment force.

Even though it might require some serious work and testing (and maybe some help from an outside party), it’s well worth the effort to make sure your loads have the right amount of containment force and that it’s properly applied.

Do a quick self-check. Are you practicing these basic containment force guidelines?

1. Know how much containment force your loads need.

2. Make sure that the correct amount of containment force is at the top, middle and bottom of your loads.

3. Have a system in place that ensures you’re really doing what you think you’re doing.

Looking for other ways to improve? Learn 5 action steps that every shipping manager and plant manager should know to make loading docks run faster and safer. Download your FREE copy of The Lean Loading Dock.

In last week’s blog, we point out that even though stretch wrapping has become the standard way to unitize a load for shipment, hardly anyone does it

Previous Post: « Are You Shipping Bad Loads?
Next Post: 3 Tips to Lower Freight Shipping Costs Before the Load Leaves the Dock »