As early as the 1970s, a large segment of American industry realized the benefits of pallet unitization. By making one big pallet load out of many smaller goods productivity dramatically improved and the chances for shipping damage were reduced. It didn’t take long for unitizing loads of goods on pallets with stretch wrapping to become the most widely used material handling method for shipping products.

The Era of Shrink Bags 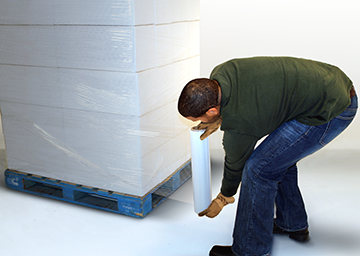 Some of the earliest pallet unitization efforts were accomplished with ovens heating a hood of film placed over the load, with the heat then shrinking the film to secure the load.

However, the energy crisis during the 1970s led to increasing energy costs and, as a result, increased costs for shrink bagging loads. This rise in costs had people looking for a more cost effective way to accomplish the same damage reducing benefits of load unitization without the prohibitive cost of shrink bags.

Stretch Wrapping to the Rescue

That is where stretch wrapping came in. In the 1970’s Pat and Bill Lancaster invented stretch wrapping as we know it with the goal of eliminating these energy issues and the quality issues associated with hand wrapping.

Today, stretch wrapping has become dominant method of unitizing pallet loads for shipment. It’s fast, efficient, inexpensive, and remarkably effective when done properly. Since Pat and Bill’s first machine, a variety for types and models of stretch wrappers have evolved to meet virtually any stretch wrapping requirement – large or small – or to fit any application.

An off-shoot of stretch wrapping with a machine was stretch wrapping by hand. This involves a person walking around a pallet load while wrapping it with a hand-held roll of stretch film. Although this method is still in use today, it is inefficient in several ways.

One of the downsides of hand wrapping is that any time you have a human doing a redundant type of job like pallet wrapping, there is a possibility for injury. Not only does an injury disrupt the process, but it also results in down time for the employee and the added costs for medical care, workers compensation and the like. Plus, if the injury is debilitating enough, a new employee must be hired and trained, which takes even more time and money.

The biggest problem with hand wrapping, however, is inconsistency. Operators just aren’t as consistent at wrapping loads as machines. Sure, operators have the potential to wrap several, good loads in a row, but it’s hard to do it well each and every time.

Stretch Wrapping with a machine is the Answer

In virtually every scenario, you can avoid the hidden costs of manual pallet wrapping by going to machine stretch wrapping. You’ll save money by reducing your film usage, you’ll have less worry about employee injuries than if they were wrapping a pallet by hand, and machine stretch wrapped loads are more likely to be pallet bonded than a load wrapped by hand.

That’s why stretch wrapping is the answer every time you wrap up and ship out a pallet.

You may be interested in these other posts on stretch wrapping:

Did you know that there are hidden costs of hand wrapping pallets? Learn how to avoid them here.

Previous Post: « The Epidemic Problem That’s Increasing Your Risk of Load Failure
Next Post: The Insidious Effect of Shipping Damage on Your Brand’s Reputation »