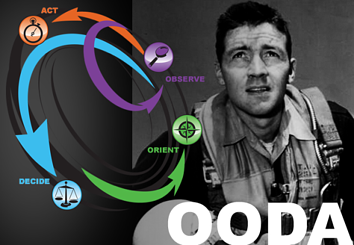 One of the things we try to do with our blog is to show how the PDCA Loop can be applied to our everyday lives. We recently saw an article on Huckberry.com, Active Mind: Like a Fighter Pilot, Applying Colonel John Boyd’s Military Strategy, the OODA Loop, to the Modern Man. (Since Huckberry is geared primarily toward men, we’ll forgive the “Modern Man” title.) The OODA Loop works much like the PDCA Loop. It has four parts — Observe, Orient, Decide, Act — as compared to Plan, Do, Check, Adjust/Act, and it’s similar in many ways. For Colonel Boyd, a Korean War fighter pilot, the OODA Loop made more sense. Look around you to see what’s going on, orient yourself to the situation, decide what to do, and then act on it. And, do that in the blink of an eye. Once you check the results (through observing), you re-orient and take your next plan of action.

Who Is Colonel “Genghis John” Boyd?

Boyd is a legend among fighter pilots for a number of reasons. The man they called the “Mad Major” and “Genghis John” originally developed the Energy-Maneuverability Theory in the 1960s as a way to measure the performance of different aircraft, which led to the development of the F-15. (They started this after he demonstrated that the Soviet MiG fighter used in Vietnam was superior to the U.S. planes, which were generally slower than other planes in use around the globe). He also helped create the F-16 and was one of the primary architects of Operation: Desert Storm in the 1990s. But it was his fighter pilot experience in the Korean War that ultimately brought him to the attention of the military brass. After the war, he became an instructor pilot who taught other pilots to fly fighter planes. As the story goes, he had a standing bet that he could begin an engagement with any student pilot at a disadvantage, and within 40 seconds, outmaneuver the pilot so he was in the advantaged position. If he couldn’t do it, he would pay $40. He never had to pay. Thanks to insights he learned in Korea and through continual study — including teaching himself calculus — he realized that the key to victory was not a plane that climbed faster or could go higher or was even bigger. Rather, he said a plane that could begin climbing quicker or change its course more quickly, could get inside the enemy’s “time/cycle loop.” It was this work and thinking that led him to create the OODA Loop, and as a result, has been called one of the most influential thinkers in warfare since Sun Tzu, the author of “The Art of War,” which is still read by military officers and business leaders today.

What Does This Have To Do With The OODA Loop?

The OODA Loop allows successful pilots — and commanders, generals, strategists, and even business leaders — to think faster than their counterparts to disrupt and paralyze their opponents. (In our case, our opponent is waste, not other companies.) The PDCA Loop generally has more time and less stress than a combat situation. We plan our next course of action based on all the available information, do the plan, check the results, and then make adjustments. Then, we make more plans based on the checks and adjustments.

According to the Huckberry article,

Boyd was fond of explaining his theory with a thought experiment (as most geniuses do). Take four scenarios: someone skiing, someone power-boating, someone bicycling, and a boy playing with a toy tank. If you take all parts of each scenario—the mountain, skiis, a lake, the boat’s motor, a bicycle, pavement, the boy, dirt, a tank—and try to integrate them, you get chaos. It’s too random, there are too many moving parts. But, if you isolate one element from each of the four scenarios, say, the skis, the boat’s motor, the bike’s handlebars, and the treads of the toy tank, you can integrate these and make something concrete and useful. Take a second and think. “A winner is someone who can build snowmobiles,” Boyd claimed; and he said it’s this kind of pattern recognition and problem solving—the OODA loop—that separates the strong from the weak.

The point of the Huckberry article, and the point we want to make, is that the OODA Loop and the PDCA Loop are tools we can apply on an individual basis. It’s not just for corporations trying to solve large complex problems, although that’s certainly where we see it the most. Can you build snowmobiles? Do you see opportunities where others only find frustration? How many entrepreneurs were born because they realized they could fix something by applying their own OODA thinking to a problem and coming up with a better solution; and could you be one of them? The PDCA/OODA Loops can easily be applied to our own lives. Maybe it’s as simple as applying a PDCA Loop to planning your next vacation or driving across the country, or using the OODA Loop while driving through the city to get to a meeting on time. Maybe it’s your executing your annual work plan, setting personal and professional goals, or even planning your long-term career. Whatever it is, adapting these feedback loops to our lives is a whole new way of thinking that can lead to some amazing accomplishments in the end.

Looking for other ways to improve? Check out our 10-Step Process for Damage Reduction Through More Effective Stretch Wrapping. Our process will show you:

Click here to read a related blog: Use a PDCA Loop for Accomplishing Goals

One of the things we try to do with our blog is to show how the PDCA Loop can be applied to our everyday lives. We recently saw an article on

Previous Post: « Eliminate the Muda: The 7 Types of Waste in Lean Manufacturing
Next Post: Use a PDCA Loop for Accomplishing Goals »