Several national packaging distributors are about to raise the curtain on new state-of-the-art research and load-testing facilities around the United States.

While the criteria for load testing will no doubt vary among them, we believe it’s a sophisticated and forward-thinking approach to reducing in-transit damage. It’s a widespread problem that’s frequently overlooked and vastly underestimated in the manufacturing and supply chain industries, where a “just-wrap-it-and-ship-it” mindset often prevails. 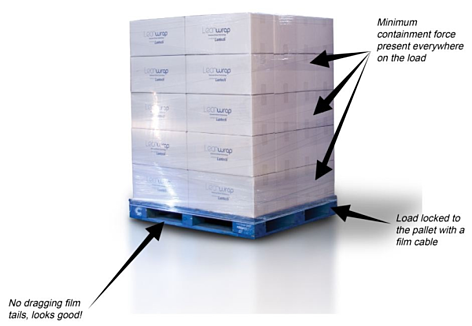 Lantech, which introduced stretch wrap technology in 1972, supports these distributors in this initiative and shares their conviction that achieving load stability is crucial to preventing shipment damage. Lantech looks forward to the new contributions that each will make to this important body of knowledge.

Manufacturers of products ranging from tissues to bottled water will be particularly interested in the resultant test metrics, and the extent to which they prove replicable. At Lantech, we’ve learned that replicating a proven load-securing process is much more effective than expensive “hazard simulation” testing, which should be reserved for cases where there is insufficient data to avoid the risk of load damage.

We’ve also learned that containment force (the collective force that holds the load together) is paramount in determining load stability. It’s the key factor in a performance-tested formula that includes locking each load to the bottom of the pallet and eliminating all dragging film tails. Decades of logistical experience has proven that this method is the most reliable – and most replicable – approach to protecting shipments.

Companies that need a sustainable solution for load instability and product damage have much to gain from Lantech’s load security protocol. To that end, we are monitoring the implementation of a new EUMOS standard methodology that the European Union (EU) will mandate beginning in June 2018. All European manufacturers will be required to submit shipments for testing and certification, though the precise test metrics are as yet unknown. To better understand the implications for our global customers, Lantech, a EUMOS partner organization, has added a EUMOS standard-capable “acceleration sled” to our Louisville Technical Center.

“It’ll be interesting to see how the EU test methodology compares with what comes from the new research and testing facilities,” said Lantech Founder and Chairman Pat Lancaster, a member of the ASTM stretch wrap standards committee. “It’s our belief that their findings will affirm what we’ve long known: that containment force is the most important parameter in ensuring stable loads.”