This picture is the story of a classic struggle – good intentions versus misdirected attention – that’s all too common in the world of stretch wrapping. Companies see the film costs of stretch wrapping and are generally concerned with how to reduce that expense by a few percentage points. However, they fail to take into account how little it is actually saving them.

It only takes about $10 of stretch film to ship a typical truckload of pallets. However, 1/2%* of total shipments are damaged to the point of being unsalable on the way to their destinations, generating billions of dollars of losses a year.

Go after the Real Opportunity 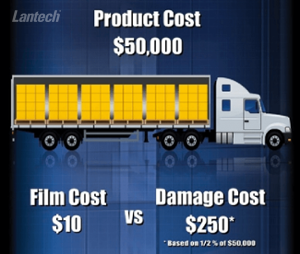 More time and energy are typically spent on reducing film cost than on reducing damage. This is particularly unfortunate because our experience indicates at least a quarter, if not more, of goods that become unsalable from shipping damage can be saved simply by doing a better job of stretch wrapping.

So, what constitutes “doing a better job of stretch wrapping”?

First, you need to apply enough containment force (the total squeezing pressure the film exerts on the load) to the top, middle and bottom of the load. Containment force, usually measured in pounds kilograms, is what holds the load together.

Additionally, avoiding dragging film tails is key for securing the load to the pallet. Dragging film tails can get caught, pulled, or ripped and lead to a loss of containment force and, ultimately, load failure.

So, what’s the bigger payoff?

Saving a few percent on of stretch film or reducing the shipping damage that can result from ineffective stretch wrapping?

Talk about a no-brainer.

*Based on the 2008 Joint Industries Unsalables Report: The Real Causes and Actionable Solutions. Copyright 2008 by the Grocery Manufacturers Association and Deloitte Consulting LLC.

There’s more to be gained by reducing shipping damage caused by poor stretch wrapping than by trying to reduce stretch film cost.