Millions of loads slide off their pallets during shipment each year, resulting in billions of dollars of damage and waste. These loads start their shipment journeys by being stretch wrapped, a process that’s supposed to prevent this problem.

Why do loads slide off their pallets? 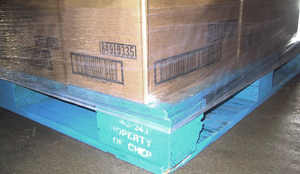 Because they’re not adequately bonded to them.

1. Vibration and Sudden Starts and Stops

They’re inherent in truck and rail shipments. Unless attention is paid to the load-to-pallet bond, vibration can cause unitized loads to “walk off” their pallets, given the opportunity. Sudden stops or starts can also cause unitized loads to slide off their pallets. Both situations create risk of damaged or unsalable products if there’s room for the product loads to move or shift in trailers or rail cars.

Each time forklifts or pallet jacks pick up loads stretch wrapped to the bottom of their pallets, opportunities are created for something bad to happen because their forks punctured the stretch film.

There’s a risk that the film punctures could spread from the vibration and multiple handlings during shipment and lead to load failure – resulting in damage or unsalable products.

How do you create a pallet bond without risking film punctures?

A film cable placed just below the top deck board of a pallet creates a secure load-to-pallet bond. Rolling the bottom 5 inches of the film the film web into a tight cable during the last part of the stretch wrapper’s wrap cycle and driving it down onto the pallet — about an inch below its deck board — is the most effective way to bond or lock the load to the pallet.

It’s not the only way to bond a load to a pallet, but it’s the way we recommend. This method works better than “regular” roping (when the film is bunched into an accordion-like rope) because it’s hard to position the regular rope just where you want it on the pallet — high enough to keep from being punctured by pallet jack or forklift forks and low enough to bond or lock the load to the pallet.

Regular roping also tends to unbunch during the stress of shipment, which reduces its effectiveness. In fact, our research shows that a film cable bonding significantly outperforms regular roping.

There’s more than enough risk to go around in today’s world.

Why take chances with your loads when there’s an easy, inexpensive, and effective way to improve their chances of arriving safely at their destinations?

Learn more about load-to-pallet bonding or locking the load to the pallet by watching this video.

Millions of loads slide off their pallets during shipment each year causing billions of dollars of damage and waste. Securing pallet loads can stop that slide.

Previous Post: « Rise of Recycled Corrugated & What It Means for End of Line Packaging
Next Post: Semi-Automatic Stretch Wrapper FAQs »