Imagine you’re a car dealer. You order hundreds of cars to your dealership, but every once in a while a brand new car just won’t start. You do the math and 1 out of every 200 cars doesn’t start, the car isn’t fixable and is a complete loss. Sure, you get to sell 199 cars but you have to take the loss of the 1 car. 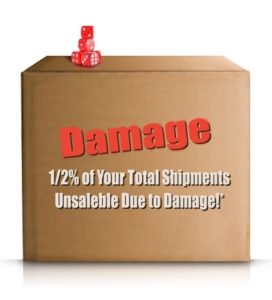 Do you think a dealership would just accept the loss? If you do the math, 99.5 percent of the cars they receive are in perfect working order. A 0.5 percent loss doesn’t seem like that much, but wouldn’t it be fair to say that a better scenario would be the dealer being able to sell all 200 cars?

When we’re accustomed to a load damage rate close to 0 percent – what dealerships actually receive – 0.5 percent is a lot. It means that on the average, one car in 200 would be a complete loss. It’s pretty easy to see that this is unacceptable.

What’s unacceptable for one transportation mode could be the norm for another. Shipping damage (damage that happens between the factory and the point of sale) for the food, beverage and consumer products industries averages about half a percent of gross sales, according to The Grocery Manufacturers Association (GMA) and the Food Marketing Institute (FMI).

The bad news is this amounts to about a $1 billion a year of damage losses in the U.S. alone. The good news is that much of this damage can be avoided.

Shipping pallets of products poses a different set of damage problems. However, they’re problems that can be avoided by using standard processes.

Here are the major causes of shipping damage to pallet loads:

If you’re shipping stretch wrapped pallets, unless you evidence to the contrary, you’re not doing better than a 99.5 percent success rate. And even if you’re hitting 99.5 percent, it’s not good enough. You’re averaging $50 to $500 of damage per truckload and leaving money on the table.

Or put another way, a $100 million company loses $500,000 a year in avoidable shipping damage. How many more widgets does it have to sell to make up that loss?

Reduce Your Shipping Damage by 50 Percent

Stop wasting money. There’s low hanging fruit to be picked. One half a percent of damage doesn’t have to be your norm. Lean processes and principles typically reduce damage and waste by 50 percent or more where ever they’re applied.

Shipping damage for the food, beverage, and consumer products industries averages about half a percent of gross sales