Single use PET bottles are a high profile target of sustainability and source reduction efforts. Major producers are keenly focused on reducing packaging throughout the process, and specifically addressing the bottles themselves.

These are impressive changes. And they’re the result of process improvements enabled by improving materials and machines.

Cutting the corrugated down to (tray) size

One of the first reduction approaches was an obvious one. Replacing corrugated with film.

There was a time when bottled water was packaged in full corrugated cases. Gradually those were replaced with corrugated trays and shrink bundling with polyethylene film. An “8 corner” tray design introduced in the 90s eliminated the sharp corrugated corners which had tended to tear the shrink bundling (or shrink wrap) film. Essentially it cut off the corners and created a shape which matched the round profile of bottles in the corners of the pack pattern.

Replacing corrugated with shrink film eliminated a substantial portion of the case packaging volume – but it wasn’t without consequence. The stacking strength which the corrugated cases provided (which remarkably can be reduced by 30% if cases simply aren’t square) was now eliminated – and at a pound/pint the weight of a load of water is a significant factor. Stacking strength isn’t a trivial concern! Now the entire stacking strength burden fell to the bottles themselves.

And that was problematic, because around the same time the corrugated cases were cut down to trays, efforts began to reduce the wall thickness of bottles – which of course further reduced the stacking strength.

Drawing down the bottle walls

As all this was happening the blow molders were getting more and more advanced. Gradually they were able to solve the problem of excessive thinning of the walls at points of maximum draw (e.g. bottom corners.) Now they had the technology to reduce the volume of plastic used in each bottle.

Alas the density of the water remained unchanged, and the consistent pound/pint burden that was now carried by the bottles would be carried by even thinner bottles. Without the carbonation which other high volume beverages relied on to fill head space and provide rigidity to think wall structures (e.g. empty aluminum cans which support one’s weight until the sidewall is lightly tapped.)

Of course carbonated water is an entirely different beast, and not what many consumers of single serving spring water had in mind. Innovation to the rescue. Nitrogen dosing offered a solution. As the video illustrates a bit of inert liquid nitrogen is squirted into the bottle just before capping. As the nitrogen evaporates, the gas fills the head space in the bottle leaving even a thin walled bottle with substantially more rigidity and stacking strength. (The same solution also helps to expel oxygen from the head space in other liquid packaging – for instance high quality wine with screw top closures.)

Progress doesn’t stop. No sooner was the stacking strength challenge resolved then a sustainability expert asked “Why trays?” After all, at that point all the corrugated was doing (aside from providing a place to print unit bar codes and a way to obscure individual codes on individual bottles) was helping to move pack patterns through the shrink bundlers (or shrink wrappers depending on your preferred term.)

And that could be accomplished by arranging the pack pattern on a corrugated pad.

And with it substantial further reduction in packaging material. Tray or pad made no difference to one of the important benefits of the corrugated between the tiers of product on a pallet. Acting as a tier sheet of sorts, the corrugated helped to dissipate forces a bit and provided a stable, flat platform for layers to stack nicely so that they could be easily contained with stretch film for shipment.

Well you know what happened next…..

The question was naturally asked “Why do we need the corrugated pad?” Remember how Switzer said Nestle Waters had eliminated another 6%. Bingo.

But now things get really tricky from a palletizing and stretch wrapping perspective.

Coefficients of friction for film need to allow for building pallets, yet resist slipping enough so that a pallet which is now built only of cases of water filled bottles wrapped in thin polyethylene. (Incidentally, aren’t today’s cases of water beautifully presented? This is certainly a case of an improved package aesthetic resulting from innovation in packaging!)

And even small movements in one unit can have a Jinga type effect on the whole load. If one unit moves enough so that the caps of the lower tier are now in the voids between the bottles above (rather than below the bottles above) the stability of the load is in jeopardy.

In other words the functional benefits of the corrugated must be replicated. Just as nitrogen dosing substituted for stacking strength, now containment force substitutes for the stability benefits of corrugated pads. 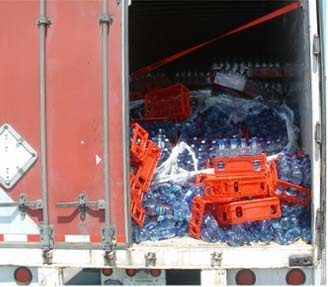 All this adds up to some seriously challenging expectations for stretch film. That 65 gauge layer (about 28 gauge by the time it’s pre-stretched) has to keep hundreds or thousands of pounds of water perfectly aligned so that this delicately balanced interaction of packaging materials can survive the journey of hundreds of miles in the back of a truck…and not arrive looking like this load. (Imagine – that’s what happened even with reusable plastic trays!)

That’s why containment force is critical – instead of a 3 wraps bottom, up the load, 3 wraps top, back down vanilla wrap pattern, gauge, pre-stretch, wrap force and layers need to be balanced to create the required containment force to keep the pallet together.

There’s nothing more alarming for the owners, managers or marketers of a water company to wander into a store and see bulging and sagging pallet loads of their water.

So much time, effort and money goes into creating the perfect retail experience that the last step – one that we all know is sometimes really just an after thought – is critical. Sustainability improvements have dramatically increased the challenge of stretch wrapping bottled water, and companies that have changed elements of packaging should look carefully at the delivered condition of their product. Just because you’re not hearing about damage claims doesn’t mean your product is delivered as you hope.

Those sales you’ve been missing? Maybe that’s why.

One quick note on a different, and even more challenging situation.

Pallet loads of water, built from consistent units, are tough enough as noted above. But lots of bottled water, carbonated soft drinks (csd), dairy products and energy drinks are delivered from distribution centers. The full pallets are broken down and orders are picked. Often those orders are in turn stacked on pallets.

Great warehouse management and order picking software is doing a better job of guiding workers in DCs to pick orders in an order that will allow them to build reasonably stable loads. But reasonably is the operative term.

Often loads from DCs end up comprised of different shapes and size cases and units which are stacked together, quickly (time is money) and wrapped as they’re loaded onto the route truck. These then travel local roads which are often more potholed than highways, and aside from frequent starts & stops, they’re also delivered via lift gate.

This creates a nearly impossible set of conditions which we’ll address in future articles. One need is to stretch wrap quickly – possibly using automatic high speed equipment which is often incompatible with pallet jack DC environments. Another is how to use a machine to wrap a load which is always different – irregular top layers, shop corners poking out and loads that vary from inboard to outboard with little predictability.

Keep an eye out for future articles to tackle those challenges.

Check out our other posts about palletizing and shrink wrapping bottles: