Why Do Case Erectors Jam?

We interviewed Lantech's Paul Stewart, about the significant issue of why most case erectors jam. What follows are extracts from the transcript of our conversation.

What is the Primary Reason Case Erectors Jam?

There’s no simple answer to that question. But, basically, they jam because something bad happens during the case erecting cycle. Think of it like this:  like a butterfly, a case goes through a kind of metamorphous. It starts out as a blank (also called a knockdown) which is a flat, die-cut piece of corrugated material and emerges from a case erector as a fully formed, bottom sealed case ready for use.

The case erector’s part of this metamorphosis is to take the blank, erect it (form it), and seal the bottom flaps (with either tape or hot melt adhesive) of the emerging case. Properly done, the newly erected case is “square” – all corner angles are 90 degrees – and the case is ready to do the job its designers intended:  be easy to pack and stack and provide maximum protection for its contents.

This is a little trickier than it might seem at first blush. Lots of things have to happen in sequence and on time. For example,

So anytime a blank moves or makes a transition to another section of the case erector, there’s the potential for that “something bad” thing to happen that might cause the machine to jam.

The best case erectors, though, are designed to manage these transition points and overcome the risks associated with them. Top performing case erectors, for example, use powered infeed belts in their magazines to precisely control the movement of the blanks as they move to the forming section. This overcomes the variability of unpowered, gravity-fed magazines that have little or no control over the blank and consequently are much more likely to jam. 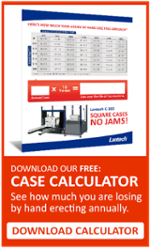 Top product development teams also pay careful attention to the design and operation of the blank separation mechanism to ensure that only one blank at a time is released to the forming section. Poor designs in this critical area are notorious for causing jams.

The actual transfer of the blank to the forming section is a transition that’s also high risk. Not only must the blank separate cleanly from the magazine, but it must also open correctly so the adjacent sides are perpendicular and the opposite sides are parallel. The best case erectors do this by using a “vacuum pick-up frame.”

This device has adjustable vacuum cups that firmly hold two panels of the blank and the frame itself forces the blank to open into a correctly formed square case. Pick-up frames are particularly effective in overcoming minor manufacturing variations in blanks – they force the blank to open correctly. This is another example of how proper attention to and management of critical transition points reduce the potential for jams to happen.

Once the case is square, that “squareness” needs to be locked-in by folding its bottom flaps. Trying to do this while the case is moving is hard and often results in a jam. It’s best to use a machine that folds the bottom flaps while the case is stationary. This is another example of maintaining control of the case can reduce the potential for jams and how a square case is delivered to the sealing section – another critical transition point.

Sealing sections consist of a pair of belts that hold the case’s long sides (its length) and convey it over a tape dispenser or hot melt glue nozzles that seal its bottom flaps. Minor differences in case widths caused by manufacturing variations in the blanks can result in jams.

If the case is too wide or too narrow when it reaches the side belts, a jam is likely unless precautions are taken. The better machines deal with these issues by “spring loading” the side belts so they can move closer together or farther apart to deal with either condition yet still hold the case securely enough to move through the section and be effectively sealed.

A Brief Note About Case Quality

There are a host of issues surrounding corrugated case quality. But for the purpose of this conversation, it’s worth noting that there’s a trend today toward using thinner board and more recycled content.

These cases challenge the capabilities of many case erectors and, in many instances, result in unacceptable and unnecessary levels of downtime. In today’s environment, the quality of the case erector is more important than ever in helping companies achieve their cost reduction and sustainability goals.

Any reputable case erector manufacturer will be happy to test your cases on their machines and work with you to ensure the benefits of your case erector are fully realized.

Check out these related posts:

Join the thousands of subscribers that are interested in palletizing, shipping and packaging.