Decoding the Terminology of Stretch Wrappers – Automatic vs Semi Automatic 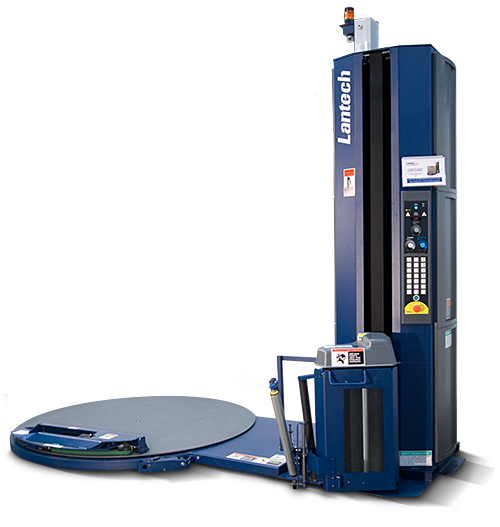 What’s in a name?

Turns out a lot – because efficiently finding the right solution for your material handling challenge may turn upon searching for and using the terms that are common in the industry. The hard part is that those terms may not be intuitive.

Similar to the conversation a colleague of mine had recently with a small business owner who wasn’t sure if he needed a shrink wrapper or a stretch wrapper (it turned out he needed the latter to unitize pallet loads with the proper containment force), we often field inquiries from buyers that are wondering whether they need a semi-automatic of fully automatic stretch wrapper.

This post is designed to provide some background information to help you focus your initial research.

Confusion sometimes arises from context. For instance, the company that hand wraps loads and is considering their first stretch wrapper might understandably refer to a simple, semi-automatic wrapper as “automatic.” It sure seems it, after all, compared to the laborious, unpleasant, and sometimes dangerous task of walking circles around pallets.

On the other end of the spectrum, an otherwise “lights out factory”, which has a material handling process that requires a fork truck driver to pick up a wrapped load as it exits a high speed pallet wrapper, might think of that operation as semi-automatic compared to other operations within their facility.

So how do you draw the line? There’s a lot of grey area that we’ll touch on below. General industry parlance though focuses on the processing of the load. So if a load is conveyed in and out of the “wrap zone” autonomously, wrapped and has the film tail secured without operator intervention, that’s an automatic pallet wrapper.

In contrast, if a load must be placed in or removed from the wrap zone by an operator, or if there are functions required to start or complete the wrapping process, then it’s considered semi-automatic. Examples of functions which require operator involvement include connecting the film to the pallet and pushing a start button, cutting the film, and securing the film tail to the load.

And then having said the definition was simple – now we complicate it a bit. There’s an intermediate category which is included in the semi-automatic world by Lantech but deemed automatic by some other manufacturers – particularly those who include a film tail wipe down element. For the sake of this discussion we’ll call these simple automation. These machines may have sections of conveyor incorporated which allow staging of unwrapped and wrapped pallets.

There’s a common misconception that the distinction is based on speed. Higher output often correlates to automatic stretch wrapping. Often automatics are bigger and faster, but it’s not a defining characteristic.

Similarly it’s often assumed that “automatic” wrappers are only appropriate for inline operations. That’s not necessarily correct. Stand-alone automatics are common – often in work cells where lean staffing and quality/process standardization of automatic wrapping indicate it.

Some applications require sophisticated WMS (warehouse management system) or MRP (materials requirements planning) system integrations – to scan codes and print-and-apply address labels automatically to a wrapped pallet, for example. In those situations, an automatic wrapper is better suited because it provides a controlled environment to reduce opportunities for operator error. So, while an automatic wrapper may be capable of running up to 100 loads/hour, the additional capabilities may make it the right choice for an application of only a few loads/hour.

Not every company needs blazing speed or integrated systems capabilities – but they focus on reducing waste in their material handling operations. From that perspective a stand alone automatic may be a perfect fit. And there are some handy workarounds that help transform semi-automatic machines into the category of simple automation.

Common types of inefficiency in the wrapping process (along with workarounds) include:

You’ll find an overview of the entire range of Lantech stretch wrap machines on this page. We think that helps illustrate the range of solutions.

Should you buy a semi-automatic or automatic stretch wrapper?

Jokes aside, one or the other will be properly suited to your requirements. In fact, you may be able to meet today’s requirement with either.

But both finding complete information to make an informed decision, and selecting a machine that will meet tomorrow’s potential requirements as well as today’s known ones, require an understanding of the terminology and range of options which exist.

Want to dig in deeper? We offer free downloadable buying guides for both semi-automatic and automatic stretch wrappers. Get yours today!

What’s the difference between an automatic and a semi-automatic stretch wrapper? Find out which one’s right for you.

Previous Post: « 6 Common Semi-Automatic Pallet Wrapper Safety Considerations
Next Post: The 15 Questions You Should Consider When Buying a Stretch Wrapper »