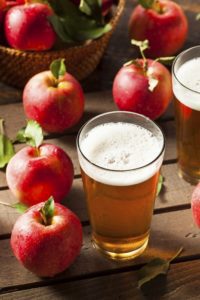 One of the fastest growing beverage categories in the U.S. is fermented apple juice a.k.a. hard cider.

Here’s how one hard apple cider producer made a change in its shipping department in order to keep up with increasing volume.

A hard apple cider producer had employed only one operator for two job functions – to hand wrap and transport the wrapped loads of bottles with a forklift several feet to the shipping dock. This process worked well without problems for several years.

But when the company’s volume increased a couple of years ago, the operator didn’t have enough time to stretch wrap and transport all of the required loads during his daily shifts. As a result, some shipments shipped late to distributors and retailers.

Luckily, the shipping manager of the company realized this problem. It was crucial to decrease the time to wrap and transport loads. He either had to hire another operator or purchase a stretch wrapper.

The shipping manager bought a semi-automatic stretch wrapper with an automation unit. The unit attaches film to the load, lets the operator start the machine and remove loads from the turntable without ever getting off the forklift.

Avoiding the repetitive motions of getting on and off the forklift saves about two minutes of labor per load, or $50,000 over the life of the machine.

Besides reducing labor, the semi-automatic stretch wrapper now applies less film to loads. The machine’s ability to pre-stretch film means the company will stop losing about $6,000 a year, or $42,000 over the life of the machine.

“This semi-automatic stretch wrapper easily handles our whole day’s shipping and we’re saving enough money on film costs to pay for it in short order,” the company’s shipping manager says.

Within a year of owning it, the machine will have paid for itself. And over seven years of ownership, the company will recover $79,000 in labor and film usage that had previously been wasted.

That’s news you can toast to.

Thinking about a new wrapper?  Don’t just pick the easiest or first. Take a careful approach to the process. We’ve got lots of free, educational resources to help  like our free eBook, “Guide to Selecting the Right Pallet Wrapper,” which you can download here for free.

“This stretch wrapper easily handles our whole day’s shipping and we’re saving enough money on film costs to pay for it,” the shipping manager says.

Previous Post: « Go for the Gold in the Shipping Olympics
Next Post: How Can A Stretch Wrapper Help Avoid Lower Back Injuries? »