Home Uncategorized How Luck and Preparation Meet at the Kentucky Derby

How Luck and Preparation Meet at the Kentucky Derby 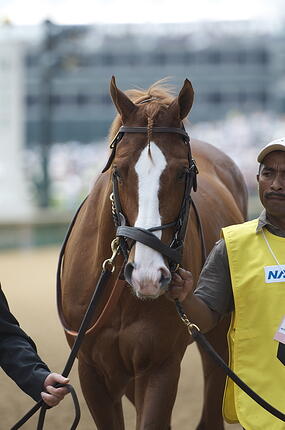 In a few days, we’ll stop what we’re doing for two minutes. We’ll watch the world’s finest three-year old thoroughbreds compete in the 140th running of the Kentucky Derby. During Derby week, we’ll throw parties, decorate with red roses, wear oversized hats, swoon over B-list out-of-town celebrities and drink a few mint juleps. And some of us will brave the crowds to join the 150,000 spectators at Churchill Downs.

The Kentucky Derby is a tradition, especially in our hometown of Louisville, Ky. We take the Derby more seriously than college basketball. The City of Louisville pockets a whopping $220 million from in- and out-of-town spending at hotels, restaurants and shops. In the midst of the excitement, we should acknowledge the behind-the-scenes effort required from trainers and the horses themselves to prepare for the most prestigious horse race in the world.

Horses go through extreme training and care for even a tiny chance at the glory the Derby brings. A glass company will etch the champion’s name onto the side of next year’s official Derby glass. He and his people will become famous (if not already) overnight. Here’s a snapshot of the business side of what it takes to get a horse to the starting gate and hopefully to the finish line first.

A racing stable’s brand depends on winning races. Racing is all about winning. Without winning, you have no business. Only the top 20 finishers of The Road to the Kentucky Derby – a series of 34 stakes races – earn a spot at the starting gate. Owners pay $25,000 to enter the race and another $25,000 to compete. The winning horse earns about $1.2 million in purse money, which will be divided among the horse’s connections – investors, trainers, owners, jockeys and barn hands. To even enter races for the chance of a win, place or show, horses must be in peak health. One leg fracture or twisted ankle can cost a thoroughbred his racing career or life. This is why extreme precautions are taken to decrease risk of injury. Whether at the stables, the track or in an airplane, people monitor a valuable horse’s every move.

Race horses must arrive at the track in good condition. Horses usually ship to Churchill Downs days, even weeks, ahead of race day to recover from their trips. They’ll travel in vans, ships, planes and trailers from within the United States and as far from away as the Middle East. Depending on mode of transportation and distance, shipping costs range from $10,000 to $100,000. Confinement, trailer motion, noise, change in temperature and road conditions can cause physical and mental stress. This means dehydration, depression, muscle fatigue and a compromised immune system. They lose about 6 percent of body weight from sweat during 24 hours of road transport, according to a Blood Horse article. But horses recover half of the lost weight during the first day at the track. Trainers monitor fatigue and injury. If they believe their horses aren’t physically or mentally fit to run, trainers will scratch them, sometimes even minutes, before post time. Art Sherman, trainer of 2014 Kentucky Derby favorite California Chrome, isn’t taking any chances with his horse’s health. After a near disastrous collision involving California Chrome and two rider-less horses (it’s common for young horses to throw their riders) during a morning workout, the trainer had an idea. Until shipment next week to Churchill Downs, he arranged for the track to close 20 minutes every morning for everyone but California Chrome and his rider. “You can’t take a chance, not with a horse like him,” Sherman told The Guardian.

A Kentucky Derby contender’s destiny is planned before he’s born. His owners and trainers carefully chose a mare and stallion typically with champion blood. A stud fee for a stallion entering breeding can range from $2,000 to $300,000 depending on pedigree and wins. It’s not an easy task to win the Derby. Nature, nurture, good training and, most importantly, good fortune all contribute to fate. California Chrome may experience a Cinderella story. Born from an average-performing broodmare and stallion, he was worth a few thousand dollars early on in his career. If he wins, he will become the fourth California-bred horse to win the Derby. But sometimes horses don’t pan out as expected. For example, The Green Monkey sold in 2006 for $16 million, a record price. The buyer paid big bucks based on The Green Monkey’s winning family history, 15-½ ft. stride length, impeccable bone structure and balance. Ironically he retired two years later after failing to win any of his three races. He has, however, gone to stud in Florida with a promising breeding career. Cigar, a horse that earned $10 million in his racing career, forewent his breeding career when vets deemed him sterile. More recently, the 2011 Kentucky Derby winner Animal Kingdom went on to earn about $8.5 million in racing alone compared to the famous race horse Secretariat (he ran the fastest in Derby history), who earned about $1.3 million in his 1970s racing career. 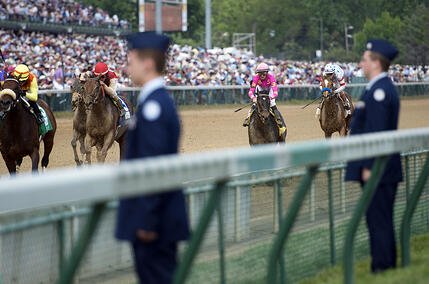 Preparation and hard work pays off. A horse’s performance at the Kentucky Derby is an predictor of a successful racing career. Owners, trainers and their 20 thoroughbreds – Hoppertunity, Candy Boy and Big Bazinga to name a few – have arrived or are arriving at Churchill Downs as you read this. For the next several days, they’ll rest, workout early mornings at the track and quickly become the center of attention. They’ll put up with reporters, photographers and handicappers (a.k.a. racing gamblers) who will have their eyes on “bullet workouts,” the fastest workouts of the morning at a specific distance.

The odds are pretty good you and the other 16.2 million people will be watching the Kentucky Derby Saturday, 6:24 p.m. EST, Saturday, May 3 on NBC. If you’re betting among friends, online or at the track, you have a 5 percent chance of picking a Derby winner at random. Or you can always take a chance and chose the favorite, California Chrome, whose current odds are 2:1. However, since the inaugural Kentucky Derby in 1875, only six favorites have won the Derby. Last year’s favorite, Orb, accomplished this feat after finishing first in four races in a row. Similarly, California Chrome has recently won four straight races. “I’m saying this right now: if this horse gets a clean trip, he will win the Kentucky Derby and he’ll go down in history,” co-owner Steve Coburn told The Guardian.

When you see the winner – whomever he is – cross the finish line, remember he defied the odds of being the 1 in 30,000 three-year-old thoroughbreds to take home the famous garland of red roses. He will continue to earn millions of dollars in his racing and breeding career. Now that’s a business plan.

Click here to learn more about the Kentucky Derby