How Does Stretch Wrapping Work?

Why do we stretch wrap? 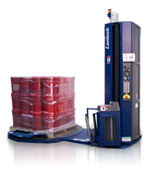 There are many reasons why we stretch wrap. One main reason is unitizing a load for shipment. Building one large package from many small packages makes it easier to transport, ship and protect individual products from damage. Preventing damage is key to getting loads from their point of origin to their destination in “as made” condition. Stretch wrapping allows us to achieve both goals (unitization for easy transportation and delivering goods without damage) in the most cost effective way.

Stretch wrapping loads keeps them from moving and shifting during transportation which is a major source of damage. There are certainly other ways for loads to be damaged during shipment, but stretch wrapping provides a measure of protection that increases the odds of “as made” condition arrival. In turn, that means lower returns, administration duties, credit due to receiver and rework costs – not to mention happier customers and colleagues.

In the 1970’s, stretch wrapping machines established themselves as the preferred packaging method for unitizing goods for shipment. Meaning that any company that deals with production, reselling, or warehousing of products probably has some familiarity with stretch wrapping.

Before the stretch wrapping process can begin a load must first be assembled on a pallet. Once the load is on the pallet, the whole ensemble (pallet and load) is stretch wrapped together.

Assembling the load on the pallet is an important step. Load placement on the pallet is key. The load should not overhang the sides of the pallet or be more than four inches inboard. The pallet itself also plays a role and should be in good condition.

It is important when stretch wrapping not to skip steps that secure the load the pallet. One options is to wrap all the way down to the bottom of the pallet. However, this runs the risk of film punctures from forklifts or pallet jacks when picking up the load. Such large punctures to the film can propagate up the load, causing a loss of containment force and increasing the risk for load failure.

Pallet Grip® is a great solution to lock the load to the pallet and avoid film punctures. The bottom few inches of the film web are automatically rolled into a tight cable at the end of the wrap cycle.  The cable is driven down just below the top deck boards of the pallet. This strong cable locks the load to the pallet and leaves enough room to clear forks and avoid the puncture problem.

Hand wrapping, as the name implies, relies on people to manually stretch wrap a load. A worker secures the film to the pallet and then walks the film around the load.

Pulling a heavy roll of film around a pallet is wrapping is physically demanding – especially if done right. Imagine the awful dizzy feeling in a hot warehouse. Hand wrapping generally has the highest material cost because there is no consistency of film usage and no substantial pre-stretch. It is also very difficult to wrap a safe-to-ship load consistently.

Semi-automatic stretch wrappers come in two different machine styles – turntable and straddle. The load is place on or in the stretch wrappers wrap zone and stretch film is applied. Turntable models will rotate the load on a turntable while straddle style models have a wrap arm that will move around the load and apply film.

There are a number of features that can be added to semi-automatic machines that offer some increased automation.  For instance, automatically cutting and clamping the film and a remote start lanyard allow fork truck operators to remain safely buckled in their seats on the trucks even while wrapping loads on a semi automatic machine.

For more help choosing the right level of automation and machine style check out our Stretch Wrapping Fundamentals pages. That’s actually the critical factor to consider – how many loads/day may not capture the surges which often occur late in the day as shipments are picked up. So loads/hour is an important factor.

It’s all about containment force

Containment force is what holds the load together. Officially, it’s the wrap force times the number of film layers. Wrap force is simply a measure of how tightly each layer of film is wrapped around the load. Film layers are the number of wraps applied to a load at a specific point.

There is no magic formula to determine the right amount of containment force. It is done through trial and error.  Wrap, test, change and repeat until you can safely say loads are arriving without damage. Using our over 45 years of experience we developed some Containment Force Guidelines. These are not hard and fast rules, but this chart will give you a good place to start.

Once you’ve found the right amount of containment force works and the stretch wrapper’s settings have been set, it is always a good idea to check periodically to ensure every load is being wrapped correctly. We recommend measuring the containment force once a shift for most operations. It is possible the machine was tampered with accidentally or to resolve other issues the machine may have been experiencing, for example repetitive film breaks after a film roll change.

Asking how does stretch wrapping work? You first have to understand why we stretch wrap loads in the first place.

Previous Post: « How Do You Turn Time Into Money?
Next Post: How Luck and Preparation Meet at the Kentucky Derby »