This is a guest post from Ed Marsh of Consilium Global Business Advisors.

Trucks carry most of the tonnage and value of freight in the United States….In 2011 nearly 14,530 miles of the NHS carry more than 8,500 trucks per day on sections where at least every fourth vehicle was a truck.  With each truck carrying an average of 16 tons of cargo, 8,500 trucks per day haul approximately 50 million tons per year. US Bureau of Transportation Statistics

Trucks are fundamental to American commerce and consumerism. Even the vast quantities of product moved by barge and rail are ultimately delivered to the point of sale or use by trucks. 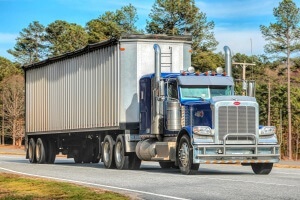 Cost fluctuations and perturbations in the trucking ecosystem have the potential, therefore, to disrupt commerce as changes occur and a new equilibrium is sought. After all, how many of us routinely approve quotes and invoices that reflect the fuel surcharges which were originally imposed when fuel prices were 100% higher than they are now?

It’s important for anyone in the material handling and logistics space to stay abreast of trends in order to position oneself for personal professional success and to help position your company for resilience. The challenge is understanding trends – because in periods of disruption it’s risky to simply extrapolate current conditions into the future.

While 3D printing may gradually disrupt manufacturing, and therefore logistics, transportation management and trucking, it’s unlikely to have too large an impact for the next decade or two. In fact, the US Bureau of Transportation Statistics forecasts a significant increase.

The number of NHS miles carrying large volumes and high percentages of trucks is forecast to increase dramatically by 2040.  Segments with more than 8,500 trucks per day and where at least every fourth vehicle is a truck are forecast to reach 42,000 miles, an increase of more than 175 percent from 2011. US Bureau of Transportation Statistics

As a forecast that’s inherently subject to known (presumably embedded) and unknown factors which by definition aren’t incorporated into that estimate.

What will the trucking industry look like in 2030 or 2040? It’s probably a safe premise that there will be more products moved by truck than in 2017.

But the Devil is likely to be in the details as the saying goes….and the transition won’t be linear; there will be ups and downs. And for some stakeholders the experience may be counter to trend.

Based on rates for the last several years freight carriers have constrained fleet purchases. Basically, based on demand for freight, there’s been an oversupply of trucks.

There are early indications that may be starting to change. On March 3rd the Wall Street Journal reported that “Heavy-Duty Truck Orders Rose for Fourth Straight Month.” The article interprets the data to indicate that “trucking companies may be expanding fleets as freight rates start pulling out of slump.” It noted, however, that an increase may only be a relative indicator rather than absolute, quoting Kenny Vieth of ACT research who said “2016 was just such a bad year for orders that 2017, even if it’s mediocre, is going to shine by comparison.” (Want a stream of stories like this? Consider following @WSJLogistics.)

Is this a blip or a trend? Nobody knows – it will take some months, or perhaps years for enough data to accumulate to draw conclusions.

But it’s an LTL trucking trend worth watching – one of several.

In 2006, the U.S. trucking industry employed 1.8 million drivers of heavy trucks…Very few new hires are expected in the near future, resulting in a driver shortage…Employee turnover within the long-haul trucking industry is notorious for being extremely high. In the 4th quarter of 2005, turnover within the largest carriers in the industry reached a record 136 percent, which means for every 100 new employees hired, 136 quit their jobs. Wikipedia

Just how bad is the shortage and what’s causing it? Cerasis often revisits the driver shortage as a theme in its exploration of various manufacturing and logistics topics. In the May 3, 2016 article “The Current State of the Driver Shortage in 2016” they included some interesting statistics:

When Cerasis revisited the driver shortage topic on January 27, 2017 they focused on the incremental impact on driver supply of 2016 regulations including electronic logging devices, drug and alcohol testing and even sleep apnea testing all contribute to “growing pressure on the industry.”

So….even while rates have been low and there have been fewer trucks, there have been even fewer drivers. And the driver shortage is likely to become more acute as regulations and pay constrain supply at the same time truck fleets seem to be growing.

The question is “what gives?” After all we all still expect to be able to select from a full range of products when we shop. More products are going to be delivered. How? Before you jump to drones, let’s take a look at self-driving developments.

Markets abhor a vacuum as the saying goes, and the absence of adequate qualified drivers has created a vacuum. Traditional approaches of talent management haven’t filled it and technology entrepreneurs are stepping in to do so leveraging the coincidental convergence of driverless vehicle technology. (Interested in how this is impacting operations inside warehouses? Check out our recent article on AGVs.)

Think this sounds futuristic? Nevada has already licensed autonomous vehicles (even with special license plates) and Daimler’s self driving truck is cruising the roads. And if you’re in Colorado, that “America” labelled Budweiser you drank this fall might have been delivered by a self-driving truck as reported here by CNBC. The Guardian went as far in February 2017, as to predict that the few remaining truck driving jobs will actually be highly sought after “white collar” jobs.

This has enormous potential implications. For instance:

And clearly there will be speed bumps (pun intended!) As Uber has quickly gone from being the example of everything good to a punching bag, it’s been sued by Alphabet’s (Google) Waymo division for alleged theft of technology.

Self driving trucks are a story that’s being written. Forecasts will be made and shattered. The exact form of trucking in 20 years (even in just 5-10) is hard to predict.

What’s clear is that it will be VERY different than today. Oversupply of trucks and shortage of drivers will likely be “old” problems. The question is, what will the new problems be? How will warehouse, logistics and transportation professionals react? Be forced to adapt?

While there’s a revolution underway in the cab, the trailer remains pretty consistent. Product on pallets will be subject to the same jeopardy in transit, just as ecommerce small parcel deliveries in corrugated cases will experience their own journeys.

Long-haul truck drivers move America. Learn about the outlook for this industry.