Louisville, KY June 2019 – The Association of American Railroads (AAR) is an industry trade group representing primarily the major freight railroads of North America and works to improve the efficiency, safety and service of the railroad industry. The AAR’s Damage Prevention & Freight Claim Committee recently approved Lantech’s Pallet Grip® as a securement solution due to its demonstrated ability to prevent product damage in transit.

Millions of loads slide off their pallets during shipment each year causing billions of dollars of rework and waste. If loads aren’t properly bonded or “locked” to the pallet, it can slide off and be damaged during shipment. Stretch wrapping all the way down to the bottom of the pallet isn’t enough. Puncture holes in the film – caused by the forks of a forklift or pallet jack –may spread up the load and jeopardize the holding force of the film.

Pallet Grip® is a Lantech exclusive feature that locks loads to the pallet. It works by rolling the bottom 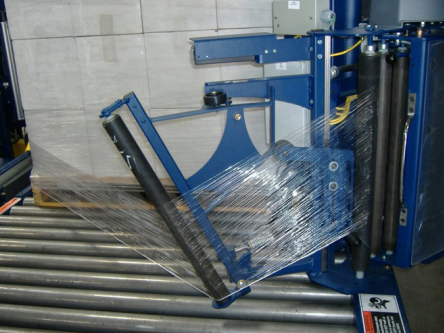 5 inches of the stretch film into a tight film cable during the last seconds of the wrap cycle. Then the cable is placed (driven down) just below the top boards of the pallet, low enough to lock the load yet high enough to avoid the forks from pallet jacks or lift.

In 1972 at the peak of the energy crisis, Lantech made an impact on the world by inventing the stretch wrapper and changing the way companies package and protect their products for shipment. Billions of pallet loads are stretch wrapped every year. Today we build case and tray handling machines in the Netherlands and stretch wrappers in the United States. Over the years our business has been built on innovation, customer support, and the mission to dramatically reduce shipping damage. Lantech is the global leader in secondary packaging solutions.