The Case of the Missing Pappy Van Winkle Bourbon 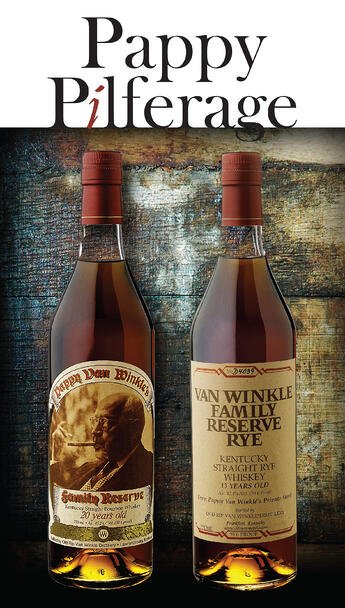 Julian P. Van Winkle, III has received dozens of calls over the last few years from fans looking for his elusive bourbon. While the third-generation president of Pappy Van Winkle bourbon has yet to be physically assaulted, his sales agents and liquor store owners have. “It can get dangerous,” Van Winkle told Garden & Gun magazine. “In Michigan, a guy physically ran our sales rep out of a store because he didn’t get but two or three bottles … Threatened him with a shoe or a gun or something. I’ve never had to deal with that kind of thing face to face, but I’m sure it’s coming someday.”

Pappy Van Winkle isn’t just another bottle of bourbon on the shelf. Heck, these days it never makes it to the shelves because of supply and demand. Only 5,000 to 6,000 cases (three bottles per case) are produced a year, compared to Jim Beam’s 7 million. Pappy varieties are worth a fortune on the secondary market, often quadruple their retail values from $50 to $130. A single bottle of 20 Year sold in October at Bonham’s auction in New York for $1190. Besides limited production, it’s expensive for a reason — the 20 Year was named the No. 1 rated bourbon whiskey in the world by the World Spirits Association. Drinkers, more often collectors, (I’ll put my husband in this category) hoard Pappy. If only we could step back in time five years ago when anyone could walk into a liquor store and buy a bottle off the shelf. Times have changed. Attorneys, doctors and school teachers burn up all the minutes on their cell phones calling around to liquor stores five times a day to find out when and where this season’s Pappy lotteries and allotments will happen. Winning these lotteries does not mean you win free Pappy, but rather you win the God-given right to indulge in the sport of retail consumerism.

In September, not all of the 5,000 cases of Pappy Van Winkle made it from Buffalo Trace Distillery (where Pappy is now distilled and bottled) to their final destinations. A very thirsty criminal had the nerve to steal 195 bottles of Pappy Van Winkle 20 Year and 27 bottles of 13-year-old Van Winkle Family Reserve Rye from the middle of a pallet. The stolen property adds up to $26,000 retail or about $100,000 to someone looking to unload on Craig’s List or in bourbon exchange groups.

The prevailing theory is the thief stole from the middle of the pallet, so the missing three-bottle cases weren’t noticeable to the naked eye. This missing bourbon went unnoticed until employees weighed the pallet and noticed a discrepancy.

Weighing is not an uncommon practice in the bourbon industry. Lawrenceburg, Ky.-based Four Roses’ warehouses, distilling facility and bottling line are in separate locations. Truck drivers pick up the bourbon from the distillery and transport it for bottling 20 miles away. The clear liquid in the tankers is measured before and after the trip, so drivers aren’t tempted to drink on the job or steal a barrel’s worth for Christmas presents.

Leads on the Pappy case have been pouring in from all over the country. About 30 tips came in one night in early December after the Kentucky Crime Stoppers agreed to give a $10,000 reward to whomever points the cops in the direction of the thief. The police recently named a Bardstown, Ky. high school principal as a person of interest after surveillance footage showed him entering a Packages and More Liquor in Elizabethtown, Ky. with “a large amount” of Pappy 20 Year. Subsequent investigation cleared the principal, and revealed he actually tried to sell part of his legally-obtained personal collection. Currently, the local police department has narrowed down its search, speculating someone snatched the booze over the course of a couple of months, beginning his mission as early as May. He would pull one or two cases out at a time from a pallet sitting in the same location.

Because Buffalo Trace weighed its load of Pappy Van Winkle product, it found an expensive problem and took action. Weighing gives you power. You can flag discrepancies and make corrections long before a customer receives product gone wrong. Plus, you’ve got a record of how much the load weighed before it left your company, which is good to have if pilferage occurs during shipping. The jeopardized Pappy load never left Buffalo Trace. Otherwise, we might not know when and where the criminal made his move (on the tractor trailer, at a rest stop, at the customer’s location?). While the action of weighing couldn’t immediately find or replace the missing bourbon, it did save a distribution center from receiving a defective load. For that, Julian Van Winkle, III may receive less hate mail and a few more “thank you” calls.

Author’s note: I wrote this story for a few reasons. My husband and I appreciate bourbon; the case of the missing Pappy Van Winkle has gotten national attention; I work in the marketing department for Lantech, a company that encourages its customers to implement weighing as a quality control method; and the Pappy story is connected to my recent research on weighing and wrapping loads at the same time. Many people in the food and beverage industry can relate to this story because it’s possible to discover missing product just by measuring the weight of loads immediately before shipment.

All information in this article was gathered from credible news sources. A representative for Buffalo Trace declined to comment.

The prevailing theory is the thief stole from the middle of the pallet, so the missing three-bottle cases weren’t noticeable to the naked eye.