What Are the Trade-Offs to Wrap My Pallet Load Effectively? 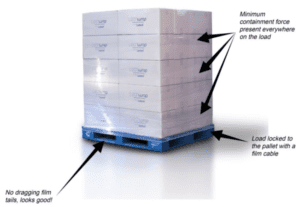 What are the trade-offs when trying to wrap my pallet load effectively? Not just any theoretical pallet load but the one sitting on the shipping dock floor in front of me?

This is a typical question our team gets on a daily basis. These questions assume a number of key issues including:

Film resins and additives may be important to chemists and technicians but people tasked with shipping pallet loads correctly and without damage care about the question of ‘how to do that’ much more that the question of ‘why a film was designed with a certain chemistry’.

From a practical standpoint today’s stretch film issues revolve around:

Let’s dig into each of these issues.

To get to an effective and efficient wrap pattern – the right amount of containment force with the least amount of film accounting for time to wrap – there are lots of choices available in the stretch wrapper’s settings. You can dial in wrap force, film layers and film delivery system speed. You can also choose different types of stretch film, gauges and pre-stretch levels. But the interactions between all these variables aren’t always obvious and if you change one you might have to make adjustments to another.

Trade-off between film layers and throughput

Generally the right formulation, the right gauge and the right pre-stretch are optimized for the right containment force for your load. With those factors aligned, then a “cut and weigh” process allows you to know precisely the amount of film required to properly wrap each load. (This is an important distinction, because often loads that look shiny and wrapped may not be wrapped according to a containment force spec). If throughput becomes an issue once this optimization process of the wrap is done then changing at the film make-up is on the table.

Reducing the number of film layers in order to increase throughput is a temptation that many high volume operations face. Film layers can be reduced and throughput increased if the film properties, thickness, and film type is adjusted. Increasing the quality, thickness, and complexity of the stretch film itself will increase film costs which in of itself is not bad if the number of film layers used to achieve the desired containment is reduced thus increasing throughput.

Each situation is different so film and stretch wrapper expertise and experience are required to make the right recommendation.

Impact of film breaks on wrap force and containment force

The problem, or confusion, often comes to the surface with film selection. Film is sold at a price per roll. There isn’t a component of containment involved, generally. Thus, customers find it difficult to rationalize between film price and containment specs. Our sales manager watched a medium-volume film user struggle with this choice as he was being courted by several good-quality film brands and their distributors. He settled on the lowest price per roll supplier (which was a generally good film, in his opinion). But film breaks were rampant as the gauge and film make up turned out to be a poor selection for their loads. When he thought about adopting containment force as his spec versus price per roll, the “weight of the world” was lifted off his shoulders and he felt that he now had a vehicle to truly compare different films and make an informed decision.

And don’t forget other considerations. In high speed wrapping applications, overstretching film can lead to frustrating and costly down-time through film breaks. This is especially common on irregular loads (like distribution centers) and corners of loads if the machine doesn’t adjust the way it feeds film.

Pre-stretch comes standard on most stretch wrappers. They can pre-stretch film between 100 to 300 percent depending on how they’re configured. Most companies, however, use between 200 and 250 percent. This gives good balance between economy and efficiency.

An average customer wrapping 50 loads a day wastes about $35,000 in film over five years when not using pre-stretch. While your car probably won’t pay for itself in two years, for many companies a semi-automatic stretch wrapper with pre-stretch can pay for itself in film savings alone in less than two years.

Best practices for determining the optimal film usage include:

The reality is that thinner film doesn’t always result in a net film savings! Decreases in film thickness result in a loss of wrap force because of increased film breaks. Because it’s notoriously hard and time consuming to find the root causes of film breaks, operators frequently get rid of them simply by decreasing the wrap force until they stop. Consequently, more film layers must be applied to recover and maintain containment force that’s lost and film consumption increases.

You may be interested in these related posts on stretch film:

What are the trade offs to wrap my pallet load effectively? Not just any pallet load but the one on the dock in front of me? Talk to the experts at Lantech.

Previous Post: « Trends in Food Packaging: How Changes in Expectations, Consumption, and Sustainability are Impacting Packaging
Next Post: How to Check Your Containment Force »