Blown vs. Cast – How is stretch film made?

Blown vs. Cast – How is stretch film made?

Every application and company is different. Sure, there are commonalities, but there’s a lot of detail that film experts and local reps consider when suggesting the optimal stretch film for an application. The “best stretch film” is relative – based on your goals, circumstances and expectations.

Film gauge, pre-stretch capability, puncture resistance, tear propagation and other performance characteristics are examples of the specs which the film experts will consider with you as they help to select a film.

There’s a basic difference in how films are manufactured though that’s interesting to understand as someone who relies on the “system” of stretch wrapping equipment and film to safely deliver your loads to their destination.

Films are either blown or cast.

Let’s look at the difference in the manufacturing process. Please note – this is intended to be informative and not to specify one method or material or another. 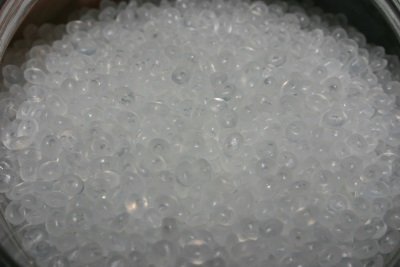 All stretch film starts with some polymeric feed stock. Often referred to as resin, the small pellets of plastic material look like BB’s and are delivered by rail car or in gaylords.

The chemical engineering of film is a very complex topic and often films include multiple layers – each of which may include different resins and additives.

An example of additives used in stretch film include pigment (for tinted or opaque films used for security), tackifier (to provide ‘cling’ so the film can stick to itself) and UV resistance (to prevent deterioration of film when products such as mulch and fertilizer are stored outside.)

The extrusion process involves the heating and compression of resin – once melted and at the right temperature for the needed viscosity it is pushed through a die which creates a continuous layer of plastic. 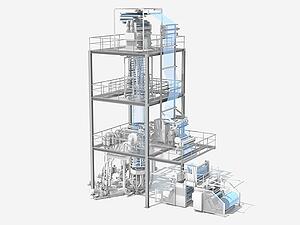 Blown film is created as the thick layer of extruded film emerges from a circular die and a large bubble of air is blown inside. The volume of the bubble, and the original diameter and thickness of the extruded tube determine the ultimate gauge (thickness) of the material.

The vertical bubble, which may be many feet tall, allows the film to cool gradually as it is pulled up by rollers which collapse the bubble and control the thin, flat tube of film as it is wound.

Often in the rewind process the edges are slit off and rolls are slit to width and wound in line as the film is extruded.

This is a vertical process as shown in the schematic. 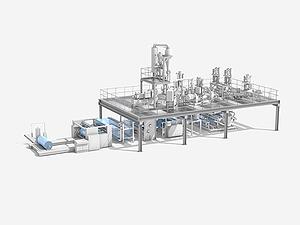 Cast film production involves a different process. In this case the resin is extruded through a linear die and oozes out onto large diameter chilling rollers. (Note that they may not actually be cold, but rather are much cooler than the semi-molten plastic.) Depending on the original thickness of extrusion, sometimes film is thinned to the target gauge by winding the resulting film faster than it is extruded.

This is a horizontal process as shown in the schematic.

Cast film represents the other 70-80% of stretch film manufacturing according to general industry estimates.

When you wonder “How is stretch film made?” often you’re really asking “What’s the difference between films?” or “Is cast or blown stretch film better for my application?” Those are all reasonable questions, and ones that your local film experts can answer best in the context of your requirements.

The reality is that there are a lot of similarities between cast and blown stretch film. Both types can offer money saving pre-stretch performance and effective load containment.

Generally both types can handle a range of applications. Looking at the differences between them, though, some application suitability starts to emerge.

Differences between stretch film that is cast vs. blown

For all the commonalities, there are some differences. Every formulation and manufacturers is a bit different, but some general rules of thumb apply.

There are accepted standards for testing and comparing most of these attributes. You’ll often find ASTM results referenced on film data sheets.

The prevalence of cast film (70-80% of the market by general consensus) indicates that it’s appropriate for many applications. It’s clarity and quiet unwind are appreciated by users.

There is a narrow range of applications which blown film is preferred because of it’s superior strength – pulp, paper and timber (as well as some other construction products) typically use heavy gauges of blown stretch film.

If your product isn’t really heavy and likely to puncture the stretch film, then you can probably start your evaluation considering both cast and blown options.

Film is getting thinner. Over the last 15 years typical gauge has dropped from 80 (.8 mil) to an industry average of about 65. Advances in film engineering and extrusion technology have both contributed to that change which has been welcome for it’s source reduction and sustainability impact.

Films today typically have more engineered additives to enhance strength even at very thin gauges. After all, if a 65 gauge film is pre-stretched 250%, it’s only 26 gauge as it’s applied to the load!

That thinning also creates some manufacturing challenges. Controlling gauge variation as a percentage of 1 mil film is a simpler task than 65gague. A variation of 1 gauge (.01 mil) is obviously a larger percentage for thinner film. More significantly, though, the ability to control the extrusion is technically much more challenging at thinner gauges.

From the manufacturing perspective blown film offers an advantage for controlling gauge variation – the “bubble” is typically rotated as the film is blown and wound. This distributes and mitigates some of the variation.

Is “shrink film” the same as “stretch film”?

People in the industry will know what you mean contextually if you say ‘shrink film’? But in industry speak that’s actually a specific term for a different kind of plastic – the sort that you might find wrapped around a candle or a video game box. Shrink film is sealed around a retail package and then passed through a heat tunnel which triggers chemical behavior that causes the film to collapse around the package.

Stretch film, in contrast, is used to keep pallets of product intact. It is often “pre-stretched”, or stretched by the pallet wrapping machine before the film is actually applied to the load. The film doesn’t actually shrink around the pallet. The critical tightness, or wrap force, is controlled by the tension between the load and the film feed.

But most people will know what you mean – whether you say stretch or shrink!

Many companies buy film based on gauge and $/lb (or price/roll.)

There’s actually a lot of chemical engineering that goes into the formulation and production of film. Every company is under pressure to buy smart. So you’ll want to consider not only the price/pound, but a variety of factors that a great rep will explain. These include shape, type and weight of your load; environmental considerations (e.g. wrapping in a freezer); what sort of transport and storage your product will experience; what pre-stretch percentage you expect, and others.

Generally the right formulation, the right gauge and the right pre-stretch are then optimized for the right containment force for your load. With those factors aligned, then a “cut and weigh” process allows you to know precisely the amount of film required to properly wrap each load. (This is an important distinction, because often loads that look shiny and wrapped may not be wrapped according to a containment force spec!)

Optimizing stretch wrapping operations requires an understanding how is stretch film made and what differences there are between blown and cast film.

Previous Post: « The Dirty Secret of CPG Sustainability – Do You Know Where The Bodies Are Buried?
Next Post: What are the alternatives to stretch wrap? »