Can Stretch Wrap Be Recycled?

Can Stretch Wrap Be Recycled?

Everyone is concerned about source reduction and sustainability in packaging. Driven by cost reduction initiatives, general awareness, social pressure and supplier scorecards tracked by mass retailers, manufacturers have 360 degree motivation to reduce packaging.

Going green has other facets. The net impact of changes is one example – and sometimes increased damage resulting in unsalable product in landfills may actually outweigh some reduction initiatives. Post consumer recycled content is another – and that leads to a common question.

Can stretch wrap be recycled?

The short answer is yes. Stretch film is generally made with linear low density polyethylene (LLDPE) which is denoted as category four in recycling programs.

For many plastics the real world answer is more complex. Imagine the task of collecting and sorting the films that wrap cigarette packs for instance, or that which protects the long curved “European” cucumbers in the grocery store. In contrast to retail plastic packaging which is widely distributed in very small quantities, stretch film can generally be recaptured in centralized warehouses.

That means that not only can stretch film be recycled from a theoretical or scientific perspective – but it’s actually feasible and economical from a practical perspective. 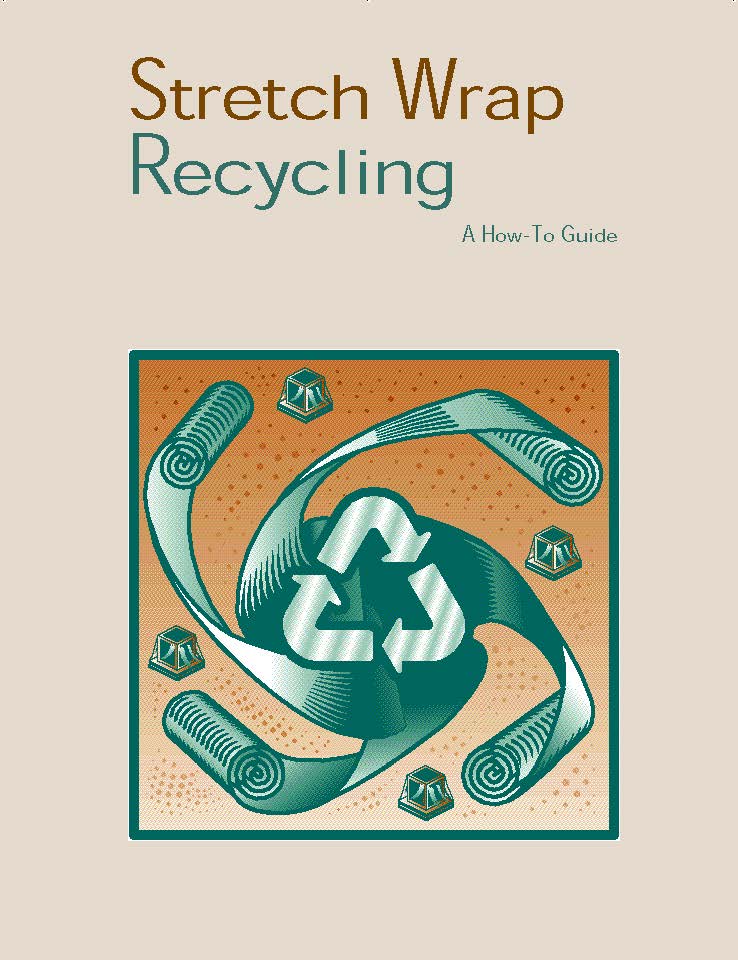 In the mid 90s the American Plastics Council and The Society of the Plastics Industry collaborated on a comprehensive stretch wrap recycling guide which remains relevant and is available for free download here.

While some of the market considerations the guide lays out are a bit dated, the sections on physical collection and consolidation provide a great starting point for a stretch wrap recycling program.

Tips on employee training and awareness, baling and storage remain applicable for today’s warehouse operations just as when it was written.

The economics of recycling may be even more favorable today than when written – and therefore the compelling CPG case studies (including Pepsi Cola, Target and Anheuser Busch) would be even more so.

APR Design® Guide specifically addresses plastic packaging, but the principles can be applied to all potentially recycled plastic items.

Because plastic packaging is so ubiquitous (the benefits are well known and include food safety, shelf-life, merchandising, volume reduction and more) it is a high profile and potentially high impact target for sustainability and recycling programs.

And lessons learned/systems developed to support plastic packaging, such as stretch wrap recycling, may hold the key to broader successes with all plastics.

That leads to a bigger topic…. 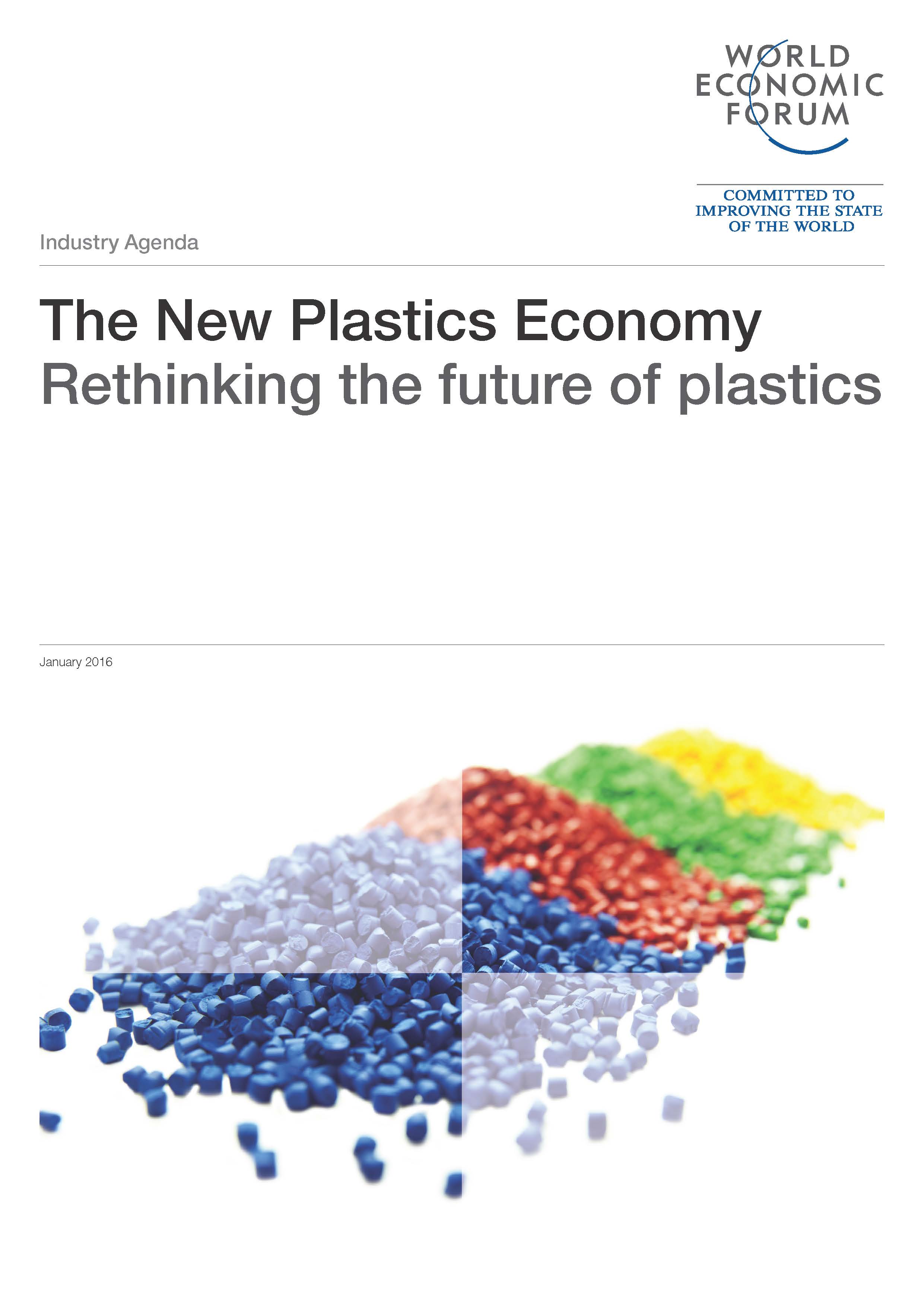 Challenges of plastics recycling in general

Stretch film recycling may be easier than recycling plastics used in retail packaging as noted above. But plastics recycling rates in general remain low.

“The New Plastics Economy; Rethinking the future of plastics” is a January, 2016 report which was a collaboration between the Ellen MacArthur Foundation, World Economic Forum and McKinsey Center for Business and Environment.

The report takes a high level, systemic look at the entire production, packaging and waste life-cycle of plastic films.

The main point it makes is the importance of what they call an “after use plastics economy” or financially viable collection and recycling ecosystem.

The potential benefits, it suggests, includes a substantial increase in the current 5% rate of recapture after single use. Since that 5% roughly equates to $4-6 billion annually, it’s easy to see how small incremental improvements could offer substantial savings.

Companies like Nestle Waters of North America are focused on supporting this high level shift through efforts like EPR (Extended Producer Responsibility) as Packaging World’s Ann Marie Mohan (@PackagingTrends) recently discussed with Nestle’s Nelson Switzer (@NelsonSwitzer).  “Packaging now accounts for 41% of Nestlé Waters’ footprint—down from 49% in 2010—as a result of light weighting our bottles”, explained Switzer. “But it’s only one approach. At NWNA, we are also focusing on innovative packaging design, partnership, education, and internal operating efficiency. The solution to closing the loop on packaging will require a multitude of solutions.”

Trending in the right direction

Even before we achieve a “New Plastics Economy” however, as more people ask whether stretch film can be recycled, and research how to do so, the rate of post consumer film recycling is improving. 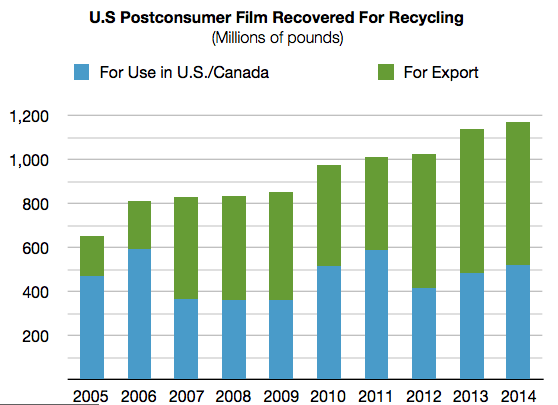 This chart from the 2014 National Postconsumer Plastic Bag & Film Recycling Report, prepared in January, 2016 by Moore Recycling Associates Inc. for the American Chemistry Council, shows the steady increase in the rate of post consumer film recovery in support of recycling.

Systems may not be perfect, but they are improving along with awareness.

A few economical process improvements in warehouses, supported by some inexpensive equipment (which likely pays for itself pretty quickly in disposal savings alone) can put every shipping/receiving operation in a better position to support greater recycling of stretch wrap.

Recycling more is a worthy goal – but many companies can actually use less film too.

Is the traditional 3 wraps bottom, up the load, 3 wraps top, back down the load wrap pattern necessary or optimal for every product? Absolutely not.

What’s the optimal pre-stretch percentage? That depends on a number of variables.

The bottom line, though, is always film weight. Once the pre-stretch, gauge and wrap pattern are optimized for the required containment force then film should be cut and weighed. (Actually cut the stretch film off a properly wrapped load, compress it and weigh it.) That’s the way to actually quantify use/load, and the benchmark against which future changes should be measured for net impact – since proper containment force theoretically means there will be no unsalable damaged products to net against film savings in the wast stream!

Yes, stretch film can be recycled. And some simple steps can reduce the amount that needs to be too!

In an effort to achieve sustainability, many CPG companies are asking ‘Can Stretch Wrap Be Recycled”. Read this Lantech article to learn more.