Why is Your Stretch Film Breaking? 3 Things to Check

Stretch Film breaks a lot – about 3 to 7 times per roll on the average. But in the hustle and bustle of the typical workday, stretch wrapper operators simply don’t have time to figure out which of these causes is making their stretch film break so much. And film breaks are more than just an irritation. Unless their causes are found and fixed, they lead to a nasty chain of events that can be difficult to escape.

The first step in this cycle is the film breaking. Then operators tweak the settings, typically turning down the film tension until the film stops breaking.

It’s understandable why an operator chooses to do this. First, many operators don’t have the time to trouble shoot the root cause of a film break. This is especially true when film breaks happen in clusters, which they often do. Additionally, lock out, tag out safety procedures are time consuming and cumbersome. With all of this working against an operator, it really is unsurprising that turning down film tension is often the go to solution when film breaks occur.

However, although it solves the immediate problem, that simple turn of a knob can set off a chain of destructive, unintended consequences that undermines the whole purpose of stretch wrapping – making sure your products ship safety to their destinations.

Turning down the film tension doesn’t hurt containment force if operators take the appropriate countermeasure: adding more film layers. Unfortunately, they often forget or don’t know that they should do this.

What causes film to break? 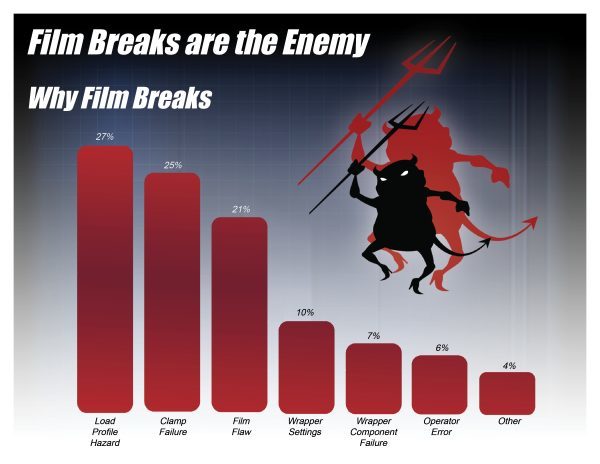 What should you be doing (rather than just turning down film tension) when film breaks?

Caught in this cycle of film breaks is a bad place to be. So, here are the first things you should check to avoid it when your film starts breaking:

1. The Stretch Film
a. Is it threaded properly?
b. Is the film the one you’re supposed to be using?
c. Are there flaws (gels, nicks, tears, etc.)?

2. The Load and Pallet
a. Are there sharp corners or protrusions?

If walking through these steps doesn’t identify the cause of your film breaks, it’s time to call in your maintenance team for help.

Unremedied stretch film breaks lead to the notorious Circle of Doom, compromising the ability of the load to ship safely.