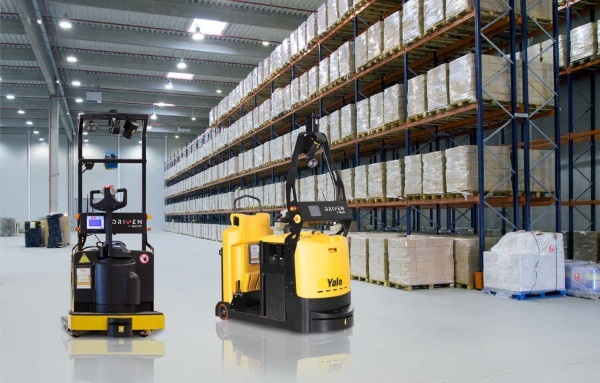 Automation offers many advantages to manufacturers. Quality, precision, consistency, increased output, safety and the ability to focus humans on tasks where their skills, judgment and dexterity make a difference.

While industrial automation covers a huge spectrum, it’s often experienced as the integration of robotic arms to support specific functions. Increasingly affordable and flexible robotics are accelerating adoption in more and more facilities, and reviews of Pack Expo International 2016 had many calling it the “robot” show.

As key manufacturing functions are automated, technology is being applied to a number of challenges in warehousing and logistics. Amazon’s purchase of Kiva and the rise of “smart” storage and inventory taking drones are a couple well known examples.

Just as with early factory robotics, many of the early applications of warehouse automation are speculative, expensive and not flexible. But the rapidly evolving technology is fueling accelerated adoption and reducing the cost and integration challenges.

Warehouse automation is increasingly accessible for SMBs and for applications in large companies which historically didn’t meet justification requirements.

AGVs are both a great example of this trend and a significant opportunity for many small and mid-sized manufacturers to improve operations.

An introduction to Autonomous Guided Vehicles

They’re known by many names including AGVs, Autonomous Guided Vehicles, and Autonomous Fork Trucks. For specialists, those names may convey subtle distinctions, but for the purposes of this article we’re talking about driverless vehicles that operate “automatically” within manufacturing, warehouse and distribution environments.

In an interview with Modern Materials Handling, Mark Longacre (the then chair of the automatic guided vehicle product section at the Material Handling Industry of America) defined an AGV as “a computer-controlled mobile robot used to move materials around a facility.”

According to Savant Automation, the AGV was invented in 1954 by Barrett Electronics, and originally, they were known as “driverless vehicles.” The “automated guided vehicle” name came into common use in the 1980s.

Actual rate of adoption is a bit tough to quantify as many companies protect that sort of information as proprietary. However, financial projections for the industry provide some indication of growth and rate of adoption. Statistics include:

Early applications were simple. One of the first AGVs was deployed to deliver mail around the Sears Tower in Chicago. In contrast, industrial applications were expensive and complex and reserved for extreme requirements. Examples of early AGV implementations include towing and “heavy carrying.” Early adopters saw the potential to not only reduce cost, but also improve workplace safety. Given the extreme nature of early applications, the extensive programming and integration, and the significant cost were justifiable based on the ability to satisfy dangerous and extreme requirements without jeopardizing safety.

As with every disruptive industry built on rapidly evolving technology, there is ongoing consolidation and launch of new players. Well known manufacturers include Savant, JBT Corp, and Egemin Automation.

As adoption becomes more common, so does awareness and innovation. For instance, as early as 2012 a study commissioned by the Automation Alliance of the MHI (Material Handling Institute) found that:

In 2014 Inc. magazine article “Automated Guided Vehicles: Behind the Swift Business of a Heavy Industry” identified AGVs as a “Best Industry” for innovative start ups. (For what it’s worth, in 2016 top of the Inc list is marijuana….)

In summary, the gradual development of AGVs which began 60 years ago, has recently accelerated. Adoption is broadening beyond heavy and dangerous applications as prices fall, technology improves and capabilities expand. It seems that AGVs might soon be on ever factory and warehouse floor.

It’s a bit unnerving to be walking through factory, warehouse or distribution center and see a driverless vehicle come around a corner and head toward you – even if you’re safely inside the demarked walkway area!

Unlike robots which are typically fixed (although new generations are moved easily from work cell to work cell and work alongside people) AGVs can conjure up images of runaway trucks. Among audiences that have undergone OSHA fork truck safety training and are aware of the potential for mayhem and grievous injury, the unattended movement of fork trucks is particularly disconcerting. Therefore, one of the elements of a system implementation is an extensive “cultural” training regimen to acclimatize workers to the presence of AGVs.

There’s also a potential set of political and workforce considerations. AGVs may be perceived as management replacing workers. In some situations, that may be the case – a cold calculation of cost. However, many implementations are predicated on safety and comfort, and an open discussion about the goals and outcomes of a project may relieve the natural concern among warehouse workers.

Examples of AGV use cases which are designed to improve worker comfort and safety include:

Just like any significant technological change, management must be aware of potential perceptions, interpretations and angst, and use transparency and training to alleviate the concerns to pave the way for a successful implementation that will deliver the anticipated return.

Beyond cost and culture, one of the impediments to broader adoption has been the need to dedicate in-house engineering resources to manage an extensive integration project and requirement to invest in facility upgrades and ongoing maintenance. Guidance systems, for instance, often required disruptive and expensive installation of wires or inductive elements into concrete floors. Alternatively, lasers searched for reflectors which were installed extensively throughout a facility.

In fact, guidance systems were one aspect which distinguished solutions from each other – and which illustrate some of the integration challenges.

But two independent trends developed in the mid-2000s that converged to disrupt the AGV market.

Electronic power steering began to be integrated into various lift truck platforms. Replacing mechanical and hydraulic systems, electronic power steering was originally envisioned as a solution to ergonomic and safety requirements. As it became more widely adopted other advantages began to emerge including improved maneuverability. Within a few years, it was a common feature of many fork lift models. (Interestingly developments in the fork truck space have led to innovations in automobile design.)

Coincidentally lidar technology, which was originally developed for meteorology, began to evolve quickly into a mapping and 3D scanning tool. In 2004 a pair of French engineers saw an opportunity to leverage lidar to create virtual maps of factory and warehouse facilities which could support AGV navigation.

Things became interesting when they mashed together their robotic software control system, a fork lift with electronic power steering and a virtual map. The essence of that combination – creating AGVs from standard fork lifts and easily implementing them in facilities without significant adaptive modifications – held promise of accessible autonomous vehicles for warehouse automation even for SMBs and lower return but important integrations in large companies.

They founded a software robotics company[JH1] they called BALYO. They identified fork trucks as a target market but knew that their expertise was in controls [JH2] [EM3] [EM4] – not the trucks themselves. They undertook a program of partnership development, and after successful partnership and growth in Europe, signed a cooperation agreement with US fork truck manufacturer Hyster-Yale in early 2016. Today they offer standard AGV control integrations on newly ordered trucks from both the Hyster and Yale lines of lift trucks – “driven by Balyo” is the way they’re described.

This approach offers some interesting advantages over a traditional purpose built automated guided vehicle. One is obvious – when needed an operator can jump on the truck and operate it using traditional controls. The biggest advantage though is ease of implementation.

Unlike legacy AGV systems which require facility modification for navigational aids (buried wires, etc.) BALYO’s lidar adaptation of traditional fork trucks simply requires some time to “learn” the warehouse by being driven around while the system gradually catalogs the various fixed features around which it will need to navigate. This means that an SMB with limited local engineering resources has the same opportunity as a multi-national with a pan-global engineering department.

AGVs can reasonably be implemented with a bit of proactive planning, several days of on site “learning” and adequate cultural & operations training to ensure operators are comfortable. (Keep in mind that an adapted, standard truck may startle operators more than an odd looking AGV moving unattended through a facility.)

Cost will remain a factor in small implementations. While a single standard truck might cost between $15-40K, an adapted truck could run >$100K installed. That’s a huge reduction from the cost of early systems, but still substantial delta. There are some economies to be had with multiple truck installations.

The cost, therefore, impacts the typical application and use case. Generally, companies that are running at least two shifts and have one of several additional factors find reasonable justifications for this sort of system. Additional factors might include safety, comfort and significant non-value added time spent shuttling products.

In a slightly counter intuitive trend, HR departments could be some of the strongest proponents of AGVs. Why? Warehouse employees are among the highest turnover roles in many companies. (Data from the Bureau of Labor & Standards reflects this with the ratio of hires to job openings in warehouse jobs.) Retention and turnover are costly propositions, and relatively low levels of unemployment translate into difficulty finding quality, interested applicants for many warehouse jobs at prevailing wages. And uncomfortable operating conditions add to the challenge. Finally, costly workers’ comp insurance is a common complaint of managers who struggle to control premiums despite best efforts to implement safety programs. After all, warehouse jobs are deceptively dangerous. The BLS states “Transportation and material moving occupations…accounted for over one-fourth of all fatal work injuries in 2015.”

Integration with systems and operations

Why’s should companies be interested in AGV’s? A couple reasons. They should be interested in technology, techniques and trends that can help improve warehouse and manufacturing operations. (For more on that download Lantech’s free guide to the “Lean Loading Dock” for 5 concrete action steps to streamline and improve warehouse and shipping operations.)

More specifically, though, companies should focus on how to efficiently get pallets of products effectively wrapped. Many discussions on stretch wrapping focus on the rotation and application of film. Companies should dig deeper as well (e.g. is the right amount of film being applied in the right way to deliver the required containment force).

In our discussions with Jeff we specifically explored how simpler adoption of AGVs might impact the traditional stretch wrapping workflow based on his observations in the field. Through that conversation, it became clear that we’re likely to see:

As AGVs become appropriate for more SMBs through solutions like BALYO’s, the process, material flow and operational environment will change substantially. Simply replicating an existing process or machine will become less common. Instead, a simple capital equipment specification for an additional stretch wrapper will become more like an initial purchase. There will be more discussion of “what’s possible” and what’s justifiable and reasonable, with lots of questions and thought around how to adapt technology to support material handling process improvement.

That will require more educational material for buyers and buying teams that include operations, engineering, maintenance, finance and purchasing folks. It’s likely that even IT will be part of those teams to ensure that appropriate integration with WMS and ERP systems is planned for.

It’s an exciting time in warehouse operations – although certainly disruptive technology like autonomous guided vehicles generates a new set of challenges and issues, at the same time it opens up enormous opportunity for process, quality and accuracy improvement.

Look for more from us on AGV’s in the future, specifically, details of how we have helped our customers successfully integrate them into warehouse operations.

Editor’s note: This article incorporates information from extensive interview with Jeff Huerta, VP of Sales for BALYO as well as general research. It’s not intended as a BALYO endorsement, but as an exploration of a topic which we believe will be of interest to our readers.

Previous Post: « The Maintenance Checklist: What to Look for When Purchasing a New Stretch Wrapper
Next Post: Working with Your Stretch Wrapper for the Best Outcomes »