A major cause of product damage is loads tipping over during transportation. Once a truck pulls out of your loading dock, what happens to your products is out of your control. Here are two things you can do to keep loads from tipping over. 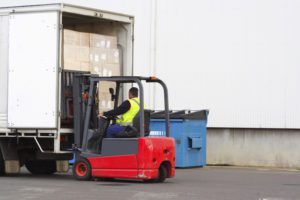 This is your first step to protecting your products. Today, stretch wrapping is the most popular way to unitize loads and using a machine will give you the best results. The better you wrap a load, the better chance it has to arrive free of damage.

However, it’s hard to tell when you’re doing it right. Following these rules will help you create a load that is safe to ship and will resist tipping over.

It’s important that you use the right pattern and pallets to make unloading easy and protect products from possible damage. Base your loading pattern on the weight and height of the pallets.

Companies around the world lose billions of dollars due to in-transit damage. There is no guarantee loads will arrive to their destination unharmed, but being smart about how you stretch wrap and load a trailer can reduce the risk of your loads tipping.

A major cause of product damage is loads tipping over during transportation. Find out how you can unitize loads properly and load trailers

Previous Post: « The Secrets of a Good Case Erector
Next Post: 8 Tips to Reduce Packaging Waste to Promote Sustainable Packaging »