Imagine you’re on a Boeing 767 with 199 fellow passengers. As the plane taxis to the destination gate, the purser turns on the intercom and says, “Please remain seated until we unload our in-flight casualty.” Then the plane docks, the door opens, and a paramedic team rushes in and quickly evacuates the injured passenger.

If this scenario actually happened on the average airline flight, how successful do you think these flights would be from a passenger point of view?

When we’re accustomed to a load damage rate close to 0% – which is what the airlines actually deliver – .5% is a lot.  It means that on the average, 1 passenger in 200 would be hurt or damaged on every flight. Most of us would probably agree that this is an unacceptable level of risk.

But what’s unacceptable for one transportation mode could be the norm for another. The Grocery Manufacturers Association and the Food Marketing Institute tell us, for instance, that shipping damage (damage that happens between the factory and the point of sale) for the food, beverage, and consumer products industries averages about .5% of gross sales.

The bad news is this amounts to about a billion dollars a year of damage losses in the U.S. alone. The good news is that much of this damage can be avoided.

By making us put our tray tables and seat backs in the upright position for take offs and landings, keeping our seat belts fastened when we’re seated, and our limiting our movement about the cabin while in flight, the airlines have all but eliminated their “shipping damage.”

Shipping pallets of products poses a different set of damage problems.  But like injuries to airplane passengers, they’re problems that can be avoided by using standard processes.

Here are the major causes of shipping damage to pallet loads: 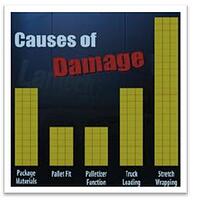 If you’re shipping stretch wrapped pallets, unless you evidence to the contrary, you’re not doing better than a 99.5% success rate. And even if you’re hitting 99.5%, it’s not good enough. You’re averaging $50 to $500 damage per truckload and leaving money on the table.

Or put another way, a $100 million company loses $500,000 a year in avoidable shipping damage. How many more widgets does it have to sell to make up that loss?

Reduce Your Shipping Damage by 50%

Stop wasting money. There’s low hanging fruit to be picked. One half a percent damage doesn’t have to be your norm. Lean processes and principles typically reduce damage and waste by 50% or more where ever they’re applied.

Get a copy of our 10 Step Process for Damage Reduction Through More Effective Stretch Wrapping and take the first steps toward driving down your shipping damage and begin recovering lost dollars now.

The risk of products being damaged during shipment to the end user is too high. Better stretch wrapping can eliminate up to 50% of this damage.

Previous Post: « Easy Way to Reduce the Risk of Load Damage
Next Post: Your Stretch Wrapping Is Causing More Damage Than You Think! »