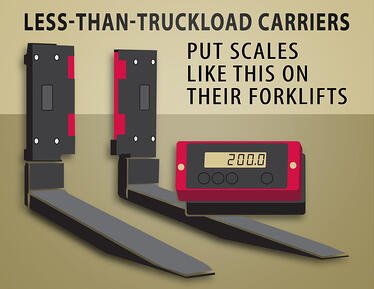 Chances are, almost every less-than-truckload pallet you ship will be weighed.

It’s done for a good reason – money.  But only recently have carriers made this progression.

Twenty years ago, carriers found it impractical to weigh every load. Lifting each and every pallet off a truck and placing it on a platform scale was too time consuming. So only 30 percent of loads were weighed. As a consequence, carriers lost money when they accepted shippers’ bills of lading without verifying their accuracy. In turn, shippers rarely received penalites for discrepancies.

Load cell technology enables carriers to create a new revenue stream that hadn’t been possible before. Scale manufacturers invented fork lift scales in the late 1990s. This invention eliminates time-consuming steps that were once required to move a pallet to a platform scale.

Federal legislation requires any company charging by the pound to use certified legal-for-trade scales for accuracy. This certification guarantees that weight measured by carriers can’t be contested by shippers that aren’t using equally precise scales. Not to mention, most certified-for-trade scales pay for themselves in three months.

When a mismatch is discovered, carriers charge shippers the weight difference and reweigh charges – from $15 to $25 – if they’re aren’t negotiated in agreed upon contracts.

Now that carriers have adapted to new technology, they’ve recovered their losses experienced during the recession and the years before using fork lifts.

LTL freight carriers are cashing in annually on $1 billion in fines alone, or 3 percent, of the $32 billion industry.

Looking for other ways to improve? Check out our 10-Step Process for Damage Reduction Through More Effective Stretch Wrapping. Our process will show you:

Click here to read a related blog: Stretch Wrapping Terminology What is Unitizing

Chances are, almost every less-than-truckload pallet you ship will be weighed.
It’s done for a good reason – money.  But only recently have carrie