From containment force to film tails, there is a lot to know if you want to achieve the efficient stretch wrapping necessary to minimize damage. 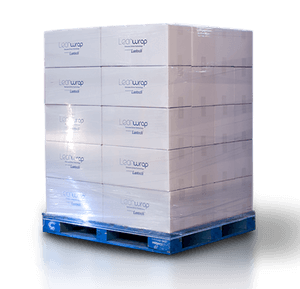 Determining what your goal containment force should be based on actual shipping data and experience. However, here’s a link to a recommendation chart that will help you figure out the right amount of containment force for your pallet loads.

Lock Your Load to Your Pallet

Another key step in effective stretch wrapping is locking the load to the pallet. Most stretch wrappers encourage you to wrap the load all the way to the bottom of the pallet. On the surface, this might seem like an adequate method for creating a pallet to load bond, but it leaves your load vulnerable. The vulnerability of this method is exposed when the pallet is ready to move.

Most pallets are moved about with a pallet jack or forklift truck. Metal prongs, or forks, are inserted into the base of the pallet and the pallet is supported as it is moved from the underside of the load by these prongs. If, however, the stretch film is wrapped all the way to the bottom of the pallet the prongs must be inserted through the film. Once the film is breached you begin to lose containment force and risk a tear or rip that completely compromises the load.

The simplest way to avoid this problem is by creating a cable with the bottom few inches of the stretch film. At the end of the wrap cycle, the film is automatically rolled into a tight cable and driven down just below the top deck boards of the pallet. The cable is tight enough to lock the load to the pallet and is high enough to clear the forks as they pick up the load.

What about film ropes? Learn more about the difference between a film rope and a film cable to secure the pallet load here.

Another place where film management comes into play is how you handle that last bit of stretch film at the end of your load. It is essential to ensure your stretch film is not left to trail along behind your load. An unsecured, or long, film tail can be caught during movement of the pallet and cause the film to be ripped or unravel.

Dragging film tails can also get tangled in downstream equipment, including conveyors, forklifts and other equipment found in factories, distribution centers and large warehouses. When a long film tail snags, it could cause the load to topple. You can prevent this by adjusting your machine settings, using automation units, film clamps, heat sealers, or wipe downs.

Once you have the basics of effective stretch wrapping handled, the next step is solving some of the most common wrap problems. You can learn more about reducing the risk of damage by fixing common wrap problems in our free webinar, How to Fix Common Wrap Problems. The webinar touches on:

Get started in stretch wrapping with this quick guide.

Previous Post: « Experts. Why They’re Important When Buying a Stretch Wrapper
Next Post: The Questions to Ask When Evaluating Stretch Wrapper Machine Manufacturers »