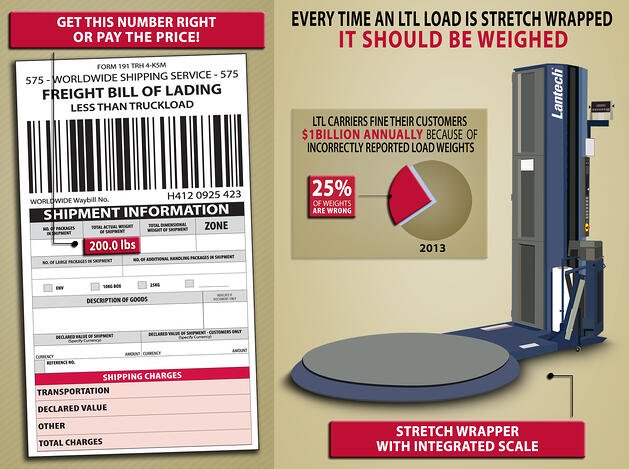 Less-than-truckload carriers weigh every pallet and catch all mistakes that their customers’ scales find. Reweigh penalties account for $1 billion in fines lost to trucking companies every year.

Many carriers’ customers, known as LTL shippers, don’t own or use scales. Instead, they estimate weight. Some shippers believe scales take up too much floor space. Or they think the extra step of transferring the pallet from the stretch wrapper to the scale is too time consuming.

Before the early 2000s, only 30 percent of loads were weighed, so carriers rarely disciplined their customers for reporting inaccurate weight.

Now carriers fine small LTL shippers – usually those sending out less than 50 loads a day – for errors. Often this happens when incorrect figures on their bills of lading have been taken from educated guesses.

Guesses occur when dock employees physically lift pallets or add up weight of individual parts or products. For example, a regional plastic manufacturer is fined twice daily from errors generated in its computer database system, adding up to $280 a week, or $13,440 a year.

Even if shippers aren’t being fined, they’re losing just as much money from overestimating weight. For years, a supervisor of an equipment manufacturer had estimated weight with his foot. This process led to overestimating each of his 25 weekly loads by $15, costing $18,000 a year.

Smart shippers are now weighing their loads – whether it’s makeup, water bottles or plastic parts. Stretch wrapping manufacturers have made this easy and cost effective by integrating scales into wrappers.

Previous Post: « Get Control of Your Email Nightmare With Lean Thinking
Next Post: Why We Love Lean Thinking in the Office (And You Should, Too!) »